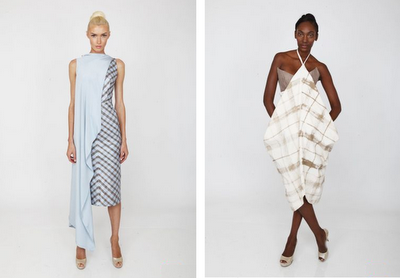 In the 'Time Capsule' episode of Bravo's The Fashion Show hosted by Isaak Mizrahi and Iman, the designers had to reference both past and future in their challenge, a concept we love here at Future-ish. Designers met Iman at the American Museum of Natural History's New York Times Capsule and then had to each choose a box with a specific design era to use as inspiration in creating an original futuristic design. Throw in that each garment had to include plaid, identified as a "timeless pattern", in some way and you get a true sartorial struggle. The House of Emerald had the week's "ultimate collection" with Jeffrey Williams' gown (above left) as the week's individual winner.