Today I had the great pleasure off viewing a new exhibit at the Tacoma Art Museum, a retrospective of Joe Fedderson's work. I was at the Museum with Patty, a fellow member of the Carver Camp Canoe Family from the past two years of Tribal Journey. Patty was a student of Joe's at Evergreen so she thought it would be fun to view the exhibit before we headed to the Chehalis Tribe where we would help Phil Red Eagle with a Copper Ring Ceremony at their Tribal Journey potlatch. The exhibit was absolutely amazing, one could very quickly pick up on the 'Urban Indian' vibe of Joe's work along with his sense of humor. Below is the Culture Icon entry I posted on my other blog, The Smart Set:

"Joe Feddersen's internationally renowned artistry comes in many forms...prints, collage, glass, and weaving. But across these media, several themes stand out: Urban Indian, a sense of place, a keen eye for pattern, and a bit of humor. His works are quintessentially Native yet thoroughly modern as they chronicle human relationships with place. His geometric prints echo the landscape of the Plateau area where he grew up and his glass and weaving pieces capture both the traditional Plateau culture and key features of the changing urban landscape such as tire treads, parking lots, and power lines. 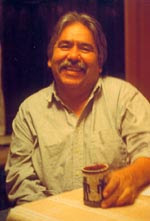 Born in 1953 in Omak, Washington of Okanogan and Lakes ancestry, Feddersen spent his early days on the Colville Indian Reservation. Later, he received a BFA from the University of Washington in Seattle and received his Master of Fine Arts from the University of Wisconsin-Madison in 1989. In 2009, Feddersen retired from Evergreen State College after twenty years. A retrospective of Feddersen's work, Vital Signs, is on exhibit at the Tacoma Art Museum through January 10, 2009."