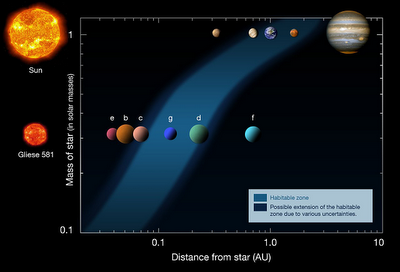 In this week's Cocktail Astronomy, we meet the new girls on the cosmic block, Gliese 581 d and g (Gliese is pronounced "Glee-zuh"). Located in the Libra constellation and only 20 light years away from us, the two Earth-like worlds are part of a planetary system around the red dwarf star, Gliese 581, named after the German astronomer Wilhelm Gliese who included the star in his 1957 Gliese Catalogue of Nearby Stars. Gliese 581d was discovered in 2007 by a team led by Stéphane Udry of the Geneva Observatory and is considered a 'super-earth' as it is 5.6 times the mass of Earth. 581d's little sister, 581g, was discovered in 2010 by a team led by Steven S. Vogt of UC Santa Cruz and R. Paul Butler of Carnegie Institute of Washington. 581g also goes by Zarmina's World, a name given in honor of Vogt's wife. Although 581g received much attention as the first exoplanet Earth that could support life, its existence is still unconfirmed making 581d the first confirmed habitable planet outside our solar system. One thing we here at Future-ish can confirm...the Gliese girls are both natural blonds given that they reside in the 'Goldylocks' zone of being 'not too far' and 'not too close' from their central star to have liquid water on their surfaces.