10.3.11. I remember it so well...the day I missed the perfect shot. It was November 2003 and I was in Milan to attend the Sustainable Everyday event. On one of the afternoons we had off, I took a long stroll down Via Montenapoleone where many of the major fashionhouses had their shops. As I was passing by the Giorgio Armani store two stunning women...reminiscent of Sophia Loren, dressed to the nines, and arms full of shopping bags, stepped out of the shop, walked around the corner a bit, and got in a tiny Smartcar. It was at that moment that I realized that if the most beautiful, stylish women in the world could go shopping at Giorgio Armani and then drive off in a Smartcar, why do we in America need to drive to the mall in our huge SUVs? I also realized I missed a great photo.

So...I was thrilled to see the Fiat 500 commercial featuring Jennifer Lopez. Not quite the picture I missed but certainly the next best thing. You can view the ad below:

I've long said that we need to use the same tried and true marketing and advertising techniques for alternative products as we do for conventional products. Celebrity endorsements are one of the most effective techniques around. So, I have no doubt that we're going to be seeing a lot of Fiat 500s on the roads in the near future. Now to be clear, these efforts are often co-branding. In the case of the Fiat 500 commercials, one commercial features scenes from her new video "Papi" and the another, tri-branding if you will, features a special edition Gucci Fiat 500 showcased during at Gucci’s Fashion Night Out event in New York. In the end, kudos to Fiat for tapping great music and fashion for their campaigns.

J-Lo isn't new to co-branding though...I remember a 2002 PSA ad and poster in which J-Lo supports the Forest Stewardship Council. Notice the largest word on the poster is 'enough'. Interesting that the the poster coincided with the release of her movie "Enough". Some claimed she was just promoting her movie, my response...Who Cares? Sustainably harvested wood had never received so much press. The PSA was produced in Spanish and Portuguese as well.. 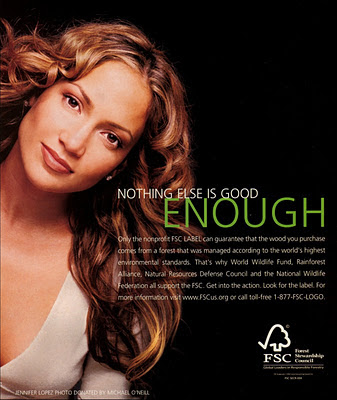 One thing for sure is that celebrity endorsements will continue to shape both the hearts and minds - and wallets - of consumers...the more this power can be used for good, the better.