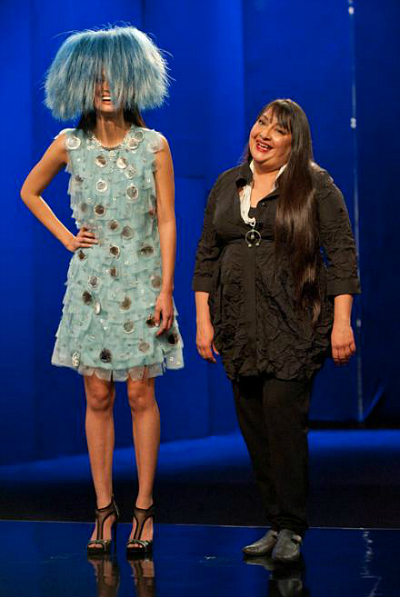 Season 11 of Project Runway has come to a close and although Patricia Michaels, my Future-ish favorite, came in 2nd place I think there were many wins during the finale. First and foremost, there were wins for all of the finalists, they all put on fantastic shows and Michelle Lesniak Franklin, the winner, was a fierce competitor with her female-wolf-on-her-last-hunt inspired creations.

But the other wins that caught my attention were the ones Patricia mentioned throughout the finale episode and across the whole season. Clearly Patricia's success in the competition was a win for her personally but she also talked about how she felt she had succeeded in representing her family and community, the Taos Pueblo located in New Mexico, well throughout the entire competition. She then referenced the role she was able to play in breaking stereotypes of Native Americans more broadly by demonstrating the unique and innovative contributions they make in fashion and many other industries. Add to all that goodness...I was thrilled - THRILLED - when she introduced herself at the Mercedes Benz Fashion Week show in her Tiwa language. She also thanked the audience in Tiwa and later her Mother shared some kind and inspiring words in Tiwa after the competition. That means millions - MILLIONS - of people have heard the Tiwa language for the first time...win, Win, WIN!

Heidi Klum, a clear fan of Patricia's, said many times throughout the season that she's never seen anything like the looks Patricia designed, Nina Garcia noted she has a "gift of creativity", and Zac Posen, also a clear fan, called her show pieces "new and different...its from her soul...its pure". Michael Kors, a guest judge for the finale said:


"When I look at the work that [Patricia] does, WOW...When I looked at that dress, that was this perfect culmination of a modern, easy shape that a girl wants to put on with this incredible mica and horse hair, I love that she took all that and merged that together, its SPECTACTULAR...I don't think we've ever seen that type of attention to artistic detail. Its cool! I think she's thinking outside the box.

I think her little blue dress and bouncy blue hairpiece may become an iconic moment in fashion. Iconic in fashion because: 1. it is a truly original and stunning design and 2. it finally breaks the convention that a Native American aesthetic can only reflect the same stereotypical pieces. Patricia has proven that culture and tradition can be referenced but still be very fashion forward. More importantly, I believe Patricia's hard work, creativity, and grace throughout the competition will become an iconic moment in mainstream media as well by demonstrating the truly original and creative talent that Native artists can bring to design industries.