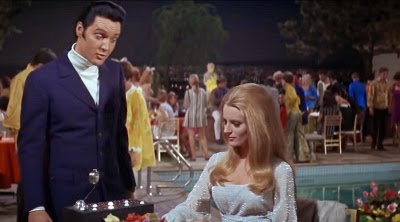 My Aunt Jean is a HUGE Elvis Presley fan...has been since she was a little girl and will always be. So I've had full exposure to Elvis Presley everything since I was a youngster myself growing up in the 1970s and 80s. As I was putting together this first issue of Confab, a particular scene with a particular song kept getting stuck in my head. Luckily it was a good song.

In Elvis Presley's 1968 film, Live a Little, Love a Little he sings one of his greatest hits, A Little Less Conversation. The song has been covered many times since that time, has appeared in many media forms throughout popular culture, and experienced a major revival in 2002 when Dutch musician Tom Holkenborg (AKA Junkie XL or JXL) remixed the song for the movie Oceans Eleven and the song hit number one charts around the world.

The scene that I remember so vividly whenever I hear the song is Elvis picking up on a woman (what a surprise) named Ellen (played by Celeste Yarnall, who Star Trek fans will recognize) at a fabulous pool party and then Elvis sang the song as they exited the hipster soiree.

There are a two things about this scene and song that moved me to highlight them in this conclusion section of Confab.

First, the line "a little less conversation, a little more action". Granted, Elvis is referring to a different sort of 'action' in this song but the line has certainly been used as a call to action for lots of more respectful things over the years...from protests to parents trying to motivate their children. So less conversation on challenging issues facing our world, such as poverty and loss of biodiversity, and more action to address them is a valid message from the song. Confab was created to spark conversations about science, design, and culture shaping our future, however, so my thought here is an easy one here. What we actually need is a lot MORE conversation along with a lot more action in order to conceptualize and realize the innovations that will truly address these and many other pressing social and environmental issues that exist today or may arise in the future.

The second item that struck me was the interaction with the "computer" in the scene. Clearly it is a prop since there is no way that a computer could have actually been that small back in 1968 but more importantly, it is an key element of Elvis and Ellen's initial conversation. In our world where laptops, smartphones, and other personal devices tend to command all of our attention, it was refreshing to know that 1. this is nothing new and 2. with the right hair (in Elvis' case a Pompadour), a good voice, and some fancy dance moves, it is possible to attract someone's attention away from their device.