City Rooftops are the New Back Yard 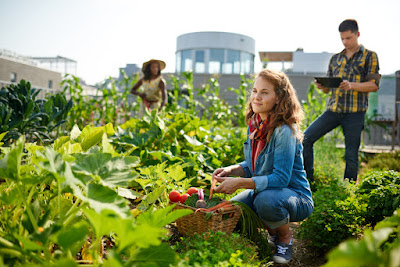 Highrises are the new “cool thing”, popping up everywhere, spreading upwards not outwards. 70,000 people have moved to Seattle since 2010. The American dream has shifted from the first, small “starter” home in the suburbs to high density, high rise, urban living. David Crowe, chief economist for the national Assoc. of Homebuilders says, “The 25- to 34-year-old age group is focused on living near their peers. They want to be socially engaged and live near work. They want to reduce their automobile use. All of those things aim at high-density, urban-type living.” “This generation is more interested in the amenities of the city itself: great public spaces, walkability, diverse people and activities with which they can participate,” says Ellen Dunham-Jones, a professor of architecture and urban design at Georgia Tech. But don’t leave out the empty nesters. They are also making the move into the city, attracted by cultural events, restaurants, shopping and in Seattle, no doubt the Pike Place Market.

There is an important element in this ingress to urban living. With the highrise, comes the flat, skyscraping rooftop. City rooftops are the urban backyard. They are bursting at the seams with huge potential, they’re flat, get lots of sun and you can access them from inside the building, making them private and hip places to hang out, with killer views and so many possibilities.

Developers and designers across the world are seeing major opportunity in these mostly untapped spaces. According to Steven Peck, founder and president of the Toronto based non-profit “Green Roofs for Healthy cities” rooftops account for between 15-35% of the total land area in the city. Rooftops however, offer much more than an exquisite territorial view, they provide room to grow food, create habitat, and help to decrease the heat island effect.

Green Roofs: not only do they look pretty and add a hint of greenery to often gray skylines but they’re also good for the environment. By reducing storm water runoff, lowering building cooling costs and helping minimize the urban heat island effect, green roofs are often a smart and visually stunning addition to the city. Succulents are often a great way to add greenery to a roof too, being drought tolerant and low maintenance, they’re a good, cost effective choice for a green roof.

Rooftop Farms: Similar to green roofs, are the ever larger and gaining popularity by the minute “rooftop farm”. You can catch glimpses of rooftop farms all over New York City, Chicago and even Seattle! One specific example is the Brooklyn Grange rooftop garden on Long Island, growing thousands of pounds of vegetables each year that are sold to urban grocers and local restaurants. In addition to sustainable usage of urban space, these farms also contribute positively to climate change and biodiversity, by lowering transportation costs to local metropolitan areas and by creating in-city habitats for native species of birds, butterflies and insects.

Tiny Homes: Some rooftops are being used to create “tiny homes” and offer affordable housing to residents hoping to live in the city. Berlin based architects Simon Becker and Andreas Rauch created “Cabin Spacey”; tiny homes built on rooftops to help maximize urban dwelling space usage by using rooftop square footage to create “tiny homes”. These “tiny homes” can house up to 2 people in 250 square feet and thanks to the use of solar panels, can run completely “off the grid”.

Recreation: Rooftops can also be used as, what? Recreation areas? A recent project in Tokyo, Japan boasts a state of the art soccer pavilion atop the Shibuya Hikarie skyscraper and in Osaka a 1000 foot astroturf track spans across several rooftops at the Morinomiya Q’s Mall Base shopping complex. We all have seen a rooftop pool on high end hotels and condos but try gyms, playgrounds, jogging paths and even movie theaters. A new apartment complex in Miami has taken over this trend and created several rooftop tennis courts and a track. Talk about “smart” and efficient use of space!

Rooftop Chicken Coops: Think a rooftop garden or farm is cool? How about adding a space for chickens to roam and beehives to sit. Chickens don’t need a lot of space to roam and they can produce enough eggs to sustain an entire apartment building. Rooftop chicken coops are popping up on some Seattle apartment complexes and popular hotels in New York City. In addition to chickens, beehives are also useful rooftop adornments, they provide local businesses with honey for cooking, cocktails, food and even spa treatments, how “eco-friendly” is that!

Rainwater Collection: Probably one of the most well known rooftop systems, especially in the Seattle area, are rainwater collection systems. Rooftops are prime real estate for rainwater catchment systems making reusing rainwater extremely easy. Harvesting rainwater can be an effective way to reuse millions of gallons of water each year. Harvested rainwater can be used for all non-potable uses such as toilet water, plant irrigation, and yard watering, in some cases I’ve even seen people use it for washing cars. Cool idea, huh?

Solar Panels: Most notably and all over the pop culture scene are rooftop solar panels. I know many Seattleites that live by the phrase “solar power is sexy”. Solar panels on roofs just make sense, there is unobstructed access to sunlight and plenty of space for large scale panels. Current trends suggest a shift toward downsizing panels and creating solar powered roof shingles (thanks to Tesla and other companies with a similar product). They look just like your average roof yet they can save you over $500/year. That really adds up over a lifetime!

Who knew that rooftops could be so cool, contribute to a more eco-friendly environment, produce food and energy thorough innovative uses and have killer views to boot!

This article was originally posted on Engel & Volkers.