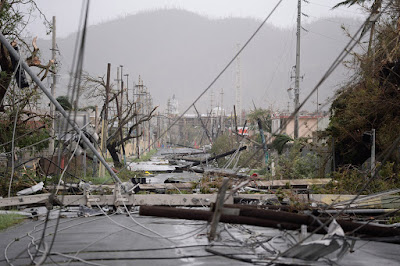 Puerto Rico post hurricane Maria.
Image Credit: Carlos Giusti/AP via CNN
The island of Puerto Rico was recently devastated by hurricane Maria, which made landfall late September near the Caribbean and South Eastern United States. With nearly every man-made structure on the island destroyed, public infrastructure in ruins, and necessities of life scarce, many residents of the U.S. territory are struggling to resume an ordinary lifestyle.
by Drue Johnson

Though Congress has already approved a $70 million dollar aqueduct and sewer aid package, they are still deliberating on how to disperse future aid funds. Current reconstruction efforts are focused on the immediate issues: providing those affected with food and potable water, as well as getting important public structures like hospitals or government facilities running with power. While representatives and volunteers focus on the issues at hand, others are already in deliberation with the local government of Puerto Rico about how to tackle the long term problems the island will face. Except, unlike many post-natural disaster reconstruction discussions, this one began with a tweet:

On October 5th, Twitter user Scott Scapf queried Musk on a topic not unfamiliar to the entrepreneur: the integration of solar technology in public infrastructure. Scapf wondered whether or not Elon Musk could use the resources provided by Tesla’s work in the solar and energy storage fields to repair Puerto Rico’s electrical grid, making it bigger and better than it was before. The curious tweeter, likely not realizing what sort of conversations his question would set in motion, received an answer from Musk not long after. The reply revealed that his team at Tesla had already completed similar projects on multiple islands, the only caveat being that successful endeavors had occurred in places smaller than Puerto Rico.

The idea then started to become reality when Ricardo Rosselo, governor of the island, boldly tweeted back at Musk that he wanted to speak about the idea, pointing out its potential to be a groundbreaking project for Musk. After a short phone call, Rosselo tweeted “Great initial conversation with @elonmusk tonight. Teams are now talking; exploring opportunities. Next steps soon to follow.”

If Musk and the government of Puerto Rico are able to reach an agreement, it would be an astounding development, and potentially a huge boon for communities that suffer natural disasters in the future. If private businesses are able to directly influence reconstructions of infrastructure, lengthy government deliberation about aid distribution could be circumvented. In this specific case, installing solar arrays and energy storage units like those Musk’s companies offer could provide a real-world example of the benefits of a society based around renewable energy, making it hard for people to argue against implementation on a larger scale. At the same time, many of the potential reconstruction costs for Puerto Rico could be mitigated by the free energy that solar provides. Presumably investors in Tesla would stand to gain a profit from the venture while Puerto Rico bounces back from the devastation, setting an example for the rest of the world at the same time.