As farm land has covered more and more of the Earth's surface, some innovators have started looking skyward. It is known as vertical farming and it is a potential method for supplying food for the world's growing population, which is increasingly concentrated in urban areas. 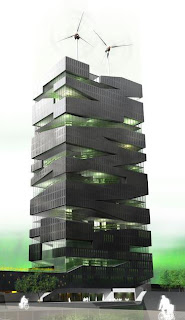 One of its proponents is Dr. Dickson Despommier, professor emeritus in environmental health and micro- biology at Columbia University. He envisions vertical farms at the heart of the world's growing urban centers. These skyscraper farms would grow crops, clean waste water, and generate their own energy with rooftop windmills and solar panels. Pests could be controlled without pesticides. Vertical farming would save space and enable urban areas to produce some of their own food and recycle its water supply. Despommier's students calculated that a single 30-story vertical farm could feed about 50,000 people.

A recent Spiegel article looked at the viability of urban agriculture in vertical structures and  some examples of vertical farming in practice. One is an three-story vertical farm in Suwon, South Korea that is experimenting with cultivation methods to make it marketable. Another is the 10-year-old PlantLab in Den Bosch in the Netherlands whose produce, which includes strawberries, beans, cucumbers, and corn, is sold to supermarkets there. These are small-scale vertical farms but they are steps toward bringing Despommier's fantastic designs to life.

The main downside to the practice is the energy required to provide light to the plants because the growing surface is stacked rather than spread out. Vertical farms that make use of reflected light and draw from renewable sources of energy can overcome this obstacle. The future of agriculture is looking up.  BP
Email ThisBlogThis!Share to TwitterShare to FacebookShare to Pinterest
Labels: Bill Pickert, Sustainable Agriculture, Urban Agriculture, Vertical Farming
Newer Post Older Post Home