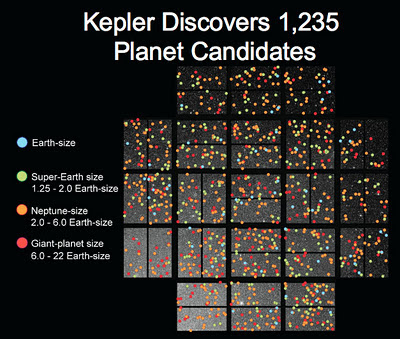 Graphic by astronomer Geoff Marcy showing size of various planet candidates in Kepler's field of view
Here at Future-ish, we love astronomy and we love cocktails. So to prep our fans (and ourselves) for those stellar weekend cocktail conversations, we are pleased to offer our Cocktail Astronomy post each Friday.

On the heels of last weeks Cocktail Astronomy in which war focus on Curiosity, NASA's latest mission to Mars, we thought it would be fun to go big time planet exploration. Leading the charge into our search for other planets is the Kepler mission and spacecraft named after the 17th-century German astronomer Johannes Kepler. Launched in 2009, the goal of the almost four year mission is to survey an area of the Milky Way galaxy to find Earth-like planets in the 'Goldilocks' or habitable zone of other stars. Kepler does this by using its photometer to monitor the brightness of over 145,000 stars in its field of view. Regular fluctuations in brightness indicate the presence of planets crossing the star. Before Kepler, it was hard to find smaller, Earth-like planet candidates but now they are becoming a dime a dozen as Kepler helps understand the size, frequency, and location of planets and planetary systems in our galaxy.

Kepler has identified 1,235 planet candidates thus far and there are many efforts underway to visualize these discoveries and data. The Lite-Brite-esque image above is one example. Below are a couple more of our favorites...