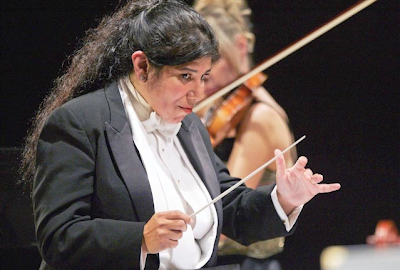 De Leon de Vega has been a guest conductor for many orchestras and opera companies and has developed concerts and children’s music workshops for the Department of Cultural Affairs, City of Los Angeles. At the Santa Cecilia Orchestra she developed the Discovering Music program that takes orchestra members into elementary schools in underserved Latino neighborhoods to introduce children to classical music, the instruments of the orchestra, and choir. The program has worked with more than 40,000 students in 35 schools introducing thousands of children to classical music, orchestral instruments, and the magic of the orchestra.

De Leon de Vega has accumulated many and diverse accolades. She was the first woman in history to conduct a symphony orchestra for the Pope, she was named named Outstanding Latina of the Year in 2000 by Univision, Mervyns, and Target, and she was voted one of the 100 most influential Hispanics in the US twice. In April 2005 Hispanic Business Magazine named her in their “80 Elite Women” list. Also in 2005, she was named “Business Woman Of The Year in Arts And Entertainment” in the State of California.

Below is a NBC Nightly News segment on De León de Vega and the Santa Cecilia Orchestra...

Visit NBCNews.com for breaking news, world news, and news about the economy