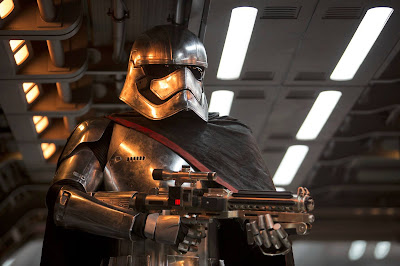 How awesome was it to see Captain Phasma on the big screen in Star Wars: The Force Awakens??? Played by Gwendoline Christie of Game of Thrones and Hunger Games fame, the character kinda kicked some ass. Sure, she was part of the dark side but that didn't stop millions of little kids getting into Darth Vader over the last few decades. I just think its it's very cool to have actors like Christie and characters such as those that Christie plays becoming part of mainstream pop culture so that young women (and yes, young men too) have a diversity of inspirational role models to look up to.

Even better, I'm loving the debates on wheter her character and armor is feminine enough. The now famous Star Wars Twitter response to a comment about it being hard to tell that she's wearing female armor sums it up perfectly: "It's Armor. On a woman. It doesn't have to look feminine". Bam! Sure, Daisy Ridley as Rey was kick ass to but she kinda fits the already established female hero character that is has become an important part of film and television these days. Christie and her characters are clearly a new persona. love, Love, Love it!