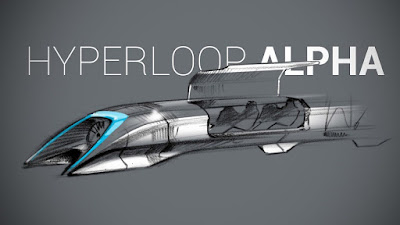 Hyperloop Alpha. Image credit: SpaceX/Tesla Motors
Bus too slow for you? Train too old-fashioned? Have you been waiting for the transportation system of the future? Look no further. Elon Musk’s Hyperloop is on the way.
by Drue Johnson

The Hyperloop is essentially a high speed train designed to transport passengers and cargo, contained within a tube. Why the tube, you ask? The unique part about the Hyperloop is how it actually moves. By being sealed within a low pressure, near vacuum environment, these trains can move a lot faster in less time. The vacuum removes most of the friction from the area within the tube, which is what allows for quicker travel. The Hyperloop that Musk is designing is actually moved within that vacuum through the use of magnetism, which would draw the trains along the tracks without using fossil fuels.

Though the idea for an “atmospheric railway” has been around for quite some time, Musk began designing his version of the concept back in 2013. Citing his dissatisfaction with the California high speed rail project, he began envisioning a “fifth mode” of transport - the first four being cars, planes, boats and trains. In order to make it more palatable than the well-established modes of travel, he aspired to create something that would be safer, cheaper, more efficient, and more sustainable than all other vehicles to date. Given the lack of pretext for something like the Hyperloop, it remained little more than an idea for a few years.

Along with his company SpaceX, Musk has hosted several competitions over the years designed to get university teams involved with and pursuing a concrete version of something like the Hyperloop. The most recent one began in early September, and is due to take place sometime in the Summer of 2018. While Musk personally sat out of cultivating a real-life Hyperloop system, several other organizations have emerged in effort to create a high-speed, low cost, tubular transport. Though these other Hyperloop groups have successfully tested their systems, according to SpaceX's Hyperloop webpage, SpaceX remains the only entity to hold competitions designed “to advance the development of functional prototypes and encourage student innovation.”

As of late, Musk has been taken a bit more forward action on being directly involved with the creation of a Hyperloop system. Another one of his ventures, The Boring Company, has been developing cheaper and more efficient ways to build tunnels for travel underground. Tunnels like these would be a must for a convenient Hyperloop system, so his recent success with tunneling has pushed him back into the high-speed transport game. In fact, rumors have been swirling about that Musk had gained approval to start constructing a Hyperloop tunnel somewhere in Maryland. The rumors were bolstered by Maryland Governor Larry Hogan’s recent public announcement in support of the loop, but Musk quickly cleared the situation up. Responding to an APTA Twitter post, Musk tweeted “not ready to do a proper announcement yet, but maybe in a month or so. Maryland has been awesome to work with and just wanted to say thanks,” it seems that the deal isn’t completely done, but great things are definitely in the works.

Not ready to do a proper announcement yet, but maybe in a month or so. Maryland has been awesome to work with and just wanted to say thanks.