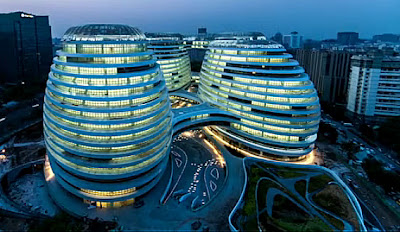 Tomorrow today. That's the only way to describe the Galaxy SOHO complex in Beijing, China designed by Zaha Hadid. SOHO happens to be the largest office real estate development corporation in China. Galaxy SOHO is being called a new landmark in Beijing and new architectural icon for the world.

Completed in 2013, the structures utilizes parametric design which synthesizes digital technology with nature. The project achieved a LEED Silver rating for its sustainability elements. A thoroughly modern structure with references to ancient traditions, the design features inspiration from both terraced rice fields and a reinvention of the classical Chinese courtyard.

Perhaps it is the dramatic soundtrack to the project video (see below), but there are distinct moments in the video in which you feel like you have actually materialized in the TRON mainframe...fantastic!