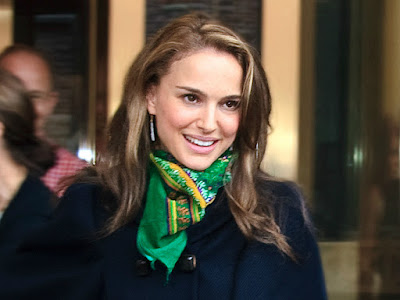 Natalie Portman at 2009 Toronto International Film Festival. Image credit: Gordon Correll. CC BY-SA 2.0, cropped.
Natalie Portman is an actor, producer, and director with American and Israeli citizenship. Portman was born in Jerusalem and is the only child of Avner Hershlag, a gynecologist, and Shelley Stevens who serves as Portman's manager. Portman had maternal great grand parents who died at the Auschwitz Concentration Camp and a paternal Romanian great grandmother who was a British Intelligence spy in WWII.

The family moved to the US for her father's medical education when Portman was three years old. Portman graduated from High School in Syosset, Long Island in 1999 and then studied ballet and modern dance at the American Theater Dance Workshop in New York. She later graduated from Harvard in 2003 with a BA in Psychology. She has studied several foreign languages, including Arabic, French, German, Hebrew, and Japanese. Portman co-authored two research papers that were published in scientific journals, first while she was in high school and the second while she was at Harvard. she was in college. "A Simple Method to Demonstrate the Enzymatic Production of Hydrogen from Sugar" was published in 1998 as part of the Intel Science Talent Search, co-authored by Ian Hurley and Jonathan Woodward. During her studies at Harvard as a research assistant to Alan Dershowitz, a paper on a memory research project she contributed to was published in 2002, titled "Frontal lobe activation during object permanence: data from near-infrared spectroscopy". Portman has taken graduate courses at the Hebrew University of Jerusalem, was a guest lecture at Columbia in 2006 and was a commencement speaker at Harvard in 2015.

Portman has appeared in many main stream and independent films, as well as television, theater, and commercials. She has been nominated for and has won many prestigious acting awards including Academy Awards, Golden Globe Awards, and SAG Awards - among many others. Portman made her directorial debut with Eve which won the 2008 shorts competition at the 65th Venice International Film Festival.

Portman has aligned herself with many causes, including animal rights, coal divestment, education, the environment, poverty alleviation, LGBT rights, micro-lending, women's rights, and both American and Israeli politics.

Portman has an Erdős–Bacon number of 7.