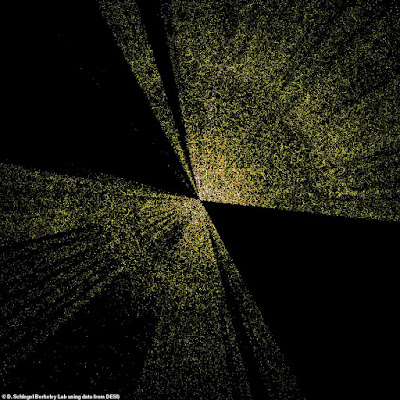 2D slice of the 3D DESI showing about 800,000 of the 7.5 million galaxies currently surveyed. Image credit: D. Schlegel/Berkeley Lab using data from DESI.
Here at Future-ish, we love astronomy and we love cocktails. So to prep our fans (and ourselves) for those stellar weekend cocktail conversations, we are pleased to offer our Cocktail Astronomy post each Friday.

This week we bring you the largest and most detailed 3D map of the universe to date, compliments of DESI, the Dark Energy Spectroscopic Instrument managed by the US Department of Energy's Lawrence Berkeley Lab. The full news release includes an animated view of the three dimensional scan. DESI measures the effect of dark energy on the expansion of the universe by collecting optical spectra for millions upon millions of galaxies and quasars stretching across 11 billion light years. And the project is only seven months old! By understanding dark energy better, scientists can better continue to research the past and future of the universe. DESI will be busy for quite some time though. The project is only about 10% complete as of January 2022 of the project's five year timeline. DESI is mounted on the Mayall Telescope at Kitt Peak National Observatory near Tucson, Arizona.

As impressive as DESI itself, the project set out from the start to acknowledge the traditional lands of the Tohono O’odham Nation. From the DESI website:

"The Kitt Peak National Observatory is located approximately fifty miles west of Tucson, Arizona and has resided on the Tohono O’odham Nation for over six decades.

The O’odham name for Kitt Peak is I’ilogam Du’ag which means manzanita bush mountain. I’oligam Du’ag is the second highest point on the land of the Tohono O’odham. It sits below the sacred Baboquivari Peak, which can be easily seen from the Mayall telescope. In the traditional beliefs of the O’odham, their creator I’itoi lives in the Baboquivari Mountains also referred to as Waw Giwulk. The DESI collaboration is honored to be studying the physical mysteries of the universe on the O’odham jewed (People’s land)."