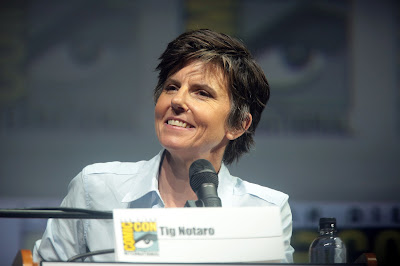 Tig Nataro is an American actor, comedian, podcaster, and writer. Notaro began her career in music as a band manager and promoter but her talent for comedy was clear when she first started doing stand up comedy in LA in the 1990s. Her projects continued to grow and landed her opportunities in film, radio, and television. When Notaro joined the cast of Star Trek: Discovery in Season 2, she expanded her fan base...by light years...BA DUM, TSH! As Cammander Jett Reno in Discovery, she not only brings her ascerbic humor that she's famous for, she brings a whole new level of role model to LGBTQIA2S+ communities and youth.

Notaro was diagnosed with breast cancer in 2012. As a breast cancer survivor, Notaro has used her visibility and experience, and unique humor, to advocate for a variety of causes including LGBTQIA2+ issues, health & wellness, and environmental causes. She has also brought attention to aspects of surviving breast cancer that society has often found challenging. Notaro became a vegan in 2017 and earned a certificate in plant based nutrition in 2019 from the T. Colin Campbell Center for Nutrition Studies.

We join many Star Trek fans in thoroughly enjoyoing her portrayal of Commander Reno on Discovery and we are incredibly thankful for her and her inspiring story in her work and in her life. She gives new inspirational meaning to that oh-so-Star-Trek phrase, "live long and prosper".

Notaro was named the Future-ish 2022 Queen of the Smart Set.