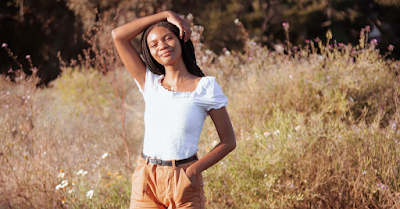 Leah Thomas is an American intersectional environmental activist and eco-communicator. She earned her BS in Environmental Science & Policy from Chapman University in 2017. Thomas was busy with student clubs and initiatives during college, but she's been even busier now with a wide range of increasingly impactful science and communications roles. She worked with the National Parks Service on two occasions and later worked as a public relations and communications assistant at Patagonia. One thing that comes through loud and clear in all of her activities is her passion for advocating for and exploring the relationship between social justice and environmentalism.

Thomas has written for media outlets including Vogue, Elle, The Good Trade, and Youth to the People and her work has been featured in Harper’s Bazaar, W Magazine, Domino, and GOOP. She has also appeared in many podcasts and media reports. And now, as of March 2022, she can add book author to her already presigious resume with the publication of The Intersetional Environmentalist.

Leah Thomas was named Future-ish's 12th Miss Next Century in 2022.