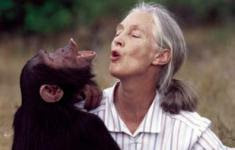 Dr. Jane Goodall is an ethologist, primatologist, environmentalist, and humanitarian known around the world for her lifelong studies of chimpanzees. As one of the first female field biologists she is often credited for laying the path for other young women in many science fields. Among many ground-breaking contributions to her field, it was her observations of tool-making and cooperative hunting in chimps that revolutionized our understanding of other advanced primates and ourselves. Often criticized for anthropomorphizing her subjects, Dr. Goodall has held her ground and suggested that it is because of her empathy that she has been able to learn so much from chimps and other advanced primate species. In recent years, Dr. Goodall has become an outspoken activist for animal welfare, conservation biology, sustainable agriculture, and peace. In 2002 she was named a Messenger of Peace by UN Secretary Kofi Annan.

Future-ish added Dr. Goodall to our PISA List in 2007.