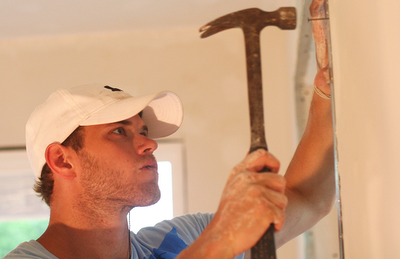 Lutz volunteering with St. Bernard Project in 2010. Image Credit: St. Bernard Project
We're not sure if Kellan Lutz is better known for his character, Emmett Cullen, in the Twilight film series or his 2010 Calvin Klein underwear campaign. What we are sure of, however, is that his first career choice may come as quite a surprise to many of his fans. After growing up in North Dakota, Arizona and other parts of the Midwest, Lutz headed west to study chemical engineering at Chapman University in California. Modeling and acting ultimately pulled him away from college but in interviews Lutz admits that he still contemplates new inventions or how he might re-engineer every day items. Lutz is also big on charities ranging from PETA to the St. Bernard Project in New Orleans. Another surprise to many is that Lutz actually started his charity work early in his career as well with his first television appearance in 2004 being on the PAX TV reality show Model Citizens in which Models travelled to different parts of the United States and worked on community projects.
Email ThisBlogThis!Share to TwitterShare to FacebookShare to Pinterest
Labels: Cause Celebs, Chapman University, Entertainers, Entertainment, Kellan Lutz, Smart Stars, St. Bernard Project, Twilight
Newer Post Older Post Home