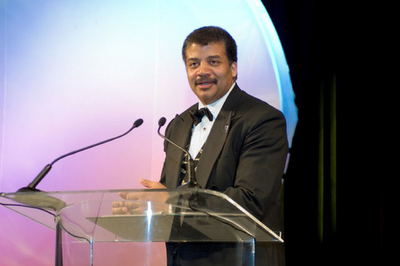 Dr. Neil deGrasse Tyson is an astrophysicist and the Frederick P. Rose Director of Hayden Planetarium at the American Museum of Natural History (AMNH). While visiting the Hayden Planetarium at age 9, Dr. Tyson relates that he was "called by the universe" to become an astrophysicist. He began lecturing on astronomy at 15, and later became editor-in-chief of the Bronx High School of Science's Physical Science Journal where he also captained the wrestling team. Dr. Tyson wrestled in college, along with rowing crew and excelling in dance styles including ballroom, jazz, and Afro-Carribean. A leading astrophysicist, Dr. Tyson's criticism of string theory due to it's over-reliance upon mathematical projections rather than testable hypotheses has made him quite controversial. Dr. Tyson also led the charge to downgrade Pluto to dwarf planet classification. Dr. Tyson has been very vocal on the topic of science and religion. Describing himself as being neither an atheist nor religious, his two Natural History Magazine essays The Perimeter of Ignoranceand Holy Wars have garnered much attention. Dr. Tyson appeared in the television show Big Bang Theory in 2010 and is a frequent guest on Comedy Central's Colbert Nation with Stephen Colbert.