SeanChron - Who is the science fairest of them all? 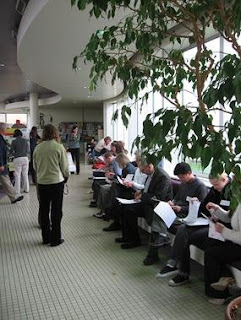 I attended my second science fair today. This time it was a full on contest. The group was made up of 6th, 7th, and 8th graders from the North Deanery schools in Seattle (Catholic Schools). I must admit, it was a completely different experience than the previous science fair. The judging was really quite an additional stress! Each of the 120 or so judges visited three projects and then judged them on ten criteria such as orginality, hypothesis testing, presentation, etc. Once again, I was really impressed with both the students and the projects. There were lots of familiar projects, such as the Coke and Menthos, but lots of pretty original projects too, like the curve of a baseball throw and the longevity of lipstick. The contests was held at the NOAA facility at Sand Point (a formal Naval base in Seattle) so I think the students were pretty psyched to be there. One thing for sure, in both formats that I've now experienced, it takes a LOT of work to organize such an event...kudos to the teachers!!! The picture above/right
Email ThisBlogThis!Share to TwitterShare to FacebookShare to Pinterest
Labels: Science, SeanChron, Youth
Newer Post Older Post Home