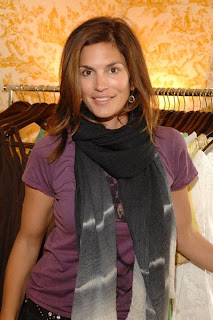 She may have one of the most famous faces in the world, but few people know that model, actress, and entrepreneur Cindy Crawford actually started out as a scientist. That's right, not only was she valedictorian of her high school class, she won an academic scholarship to study chemical engineering at Northwestern University. She only lasted one quarter before her modeling career took off. Her connection to science continued through her support of pediatric cancer research in honor of her brother who died from leukemia in childhood. In particular, she is a long time supporter of the UW Pediatric Oncology Program. She is an honorary board member of the Multiple Myeloma Research Foundation and a celebrity board member of the Ronald McDonald House Charities' Friends of RMHC program.

Ms. Crawford has also been an eco-activist for many years having served on the board of the Earth Communications Office and most recently as a spokesperson for the Pur Thirsty for Change initiative.