Dave Down Under - Out of the frying pan, into the freezer 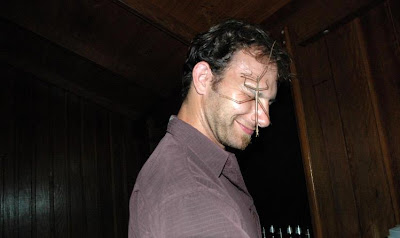 In my life-time, I've managed to do a lot of traveling, and most of this traveling has occurred in decent chunks of time. This is the longest single trip away from home I've had yet. All said and done, I will have been away for at least eight weeks, and probably closer to ten. That has yet to be determined. However, unlike most of the trips I've had, where I've had essentially one region (city, country, etc) that I've focused on, this trip has me in both Australia and Antarctica. The only thing that they have in common is they are both in the Southern Hemisphere.

At the time of this typing, I am in Christchurch, New Zealand. The United States Antarctic Terminal of the Christchurch airport to be specific. Our flight into McMurdo Station has been delayed by a few hours, so we're all hanging out in a range of cloths. The stupid, new people didn't pack comfy cloths to change into. The smart or experienced people brought standard clothing to change into in the event of a delay. So here I sit typing, in wool socks, insulated Carhart bibs, and thankfully, a short sleeve T-shirt. My ultra warm boots are off. I am uncomfortably warm. But I think there are a handful of people who have it even worse. Next time (God permitting) I will do things a little differently!

This trip started on November 21th, when my adviser, John, and I flew from Seattle to Sydney, Australia. Our end goal was sample analyses at Australia National University (ANU) in Canberra. However, we had a planned layover in Sydney so we could spend some time with John's parents. I only got to meet John's mother, as John's father was in the hospital recovering from a hip replacement. John's mother is a lovely woman, and we had a very nice, albeit short visit in the Sydney suburbs. My favorite aspect of the stay was the fantastic birds that had been trained to show up at 9am and 5pm for daily feedings. Magpies, Kookaburra's, Rainbow Lorikeets all congregated at such close proximity that I sometimes had to back off because my lens wouldn't focus that closely.

Early the next morning, we were off onto another plane to Canberra, where we would be working on our low level Cl-36 samples. The reason I was there in particular was my seawater samples that required long runs, and my experience running particle accelerators allowed me to be of assistance while we ran overnight. Keith, the director of the accelerator facility, hosted John and I. Our first couple of days in Canberra were relatively quiet. I packed sample cathodes and read quite a bit. When we were scheduled to start up, on a walk through, I noticed a water puddle underneath a primary bending magnet. This delayed our startup a bit. After the cooling water hoses had been replaced, we started turning everything else on. After the initial tuning of the accelerator, something dropped out. The power supply associated with the very same magnet died. This problem was one that killed our ability to run that day, and most of the next. After more reading and simply keeping myself busy, we finally got up and running, and Keith started teaching John and I how to run the accelerator. This allowed us to run overnight and make up for some of the time we lost to the break down. We ran my seawater chlorine samples all night, and processed some of the data. The quality of the data exceeded our expectations. Keith had done a superb job of letting the sample chamber bake out lingering chlorine from past runs, and by running the samples for some time, we were able to get excellent statistics. These samples probably have the lowest Cl/Cl36 ratios ever successfully measured with this statistical quality. Ever. So this is pretty exciting, and John and I made it through a fairly long night on coffee and the excitement of getting such fantastic data! That morning, Keith showed up at 8am to relieve us. We went home and slept for about 4 ½ hours, and went back in to the lab to see the rest of the results. All in all, it was a pretty exciting couple of days. My MS is pretty well ensured, with the last few months of paper writing, and this data collection. John thinks another paper to a prominent journal is in order, and there is much more work to be done that will fit in nicely with my PhD pursuits. John left for Sydney to spend time with family on Saturday, and I stayed with Keith through Sunday to wrap up logistics and help out in the lab.

Monday morning (Dec 1st), I dropped off my cold weather gear at a freight service to ship it to New Zealand, and then I was off in my rental car to Jervis Bay to go hunt down wildlife and check out the famous coastline. I enjoyed being lazy while there. Belinda, the owner of the backpacker I was staying in, found me lazing on the couch with my laptop quite often. It was nice to have a leisurely schedule of going out and taking pictures, chilling on the couch sorting pictures, going out for dinner and beer (by myself unfortunately), and hanging out with Tim, Maria, Vanessa and the other Swiss girl who's name I don't recall at the moment. I went out on a whale watching cruise, and only saw dolphins, spent copious amounts of time at Booderee National Park where I saw heaps of birds, an echidna and kangaroos. On my way back (Dec 4th), I swung by Pigeon House Mountain, and did a high speed ascent. I surprised myself by doing ~1,500 vertical feet in 46 minutes. And it was a lovely hike. On a clearer day, the views would have been spectacular.

That evening, I flew to Brisbane where Tracy, and ex-girlfriend lives. She and her husband Adrienne picked me up at the airport and we all went out for a late dinner and beer. Upon leaving the plane, I was hit by the wall of heat and humidity. Canberra and the coast were still warming up, but Brisbane was already there. This marks the beginning of about three weeks of continuous sweating! Tracy and Adrienne took me out to Fraser Island for off-roading adventure and stunning beaches (I got to drive on fluffy sand beaches which are notorious for bogging inexperienced drivers). We also went out to the Mt. Coot-tha Botanical Gardens, the Glass House Mountains, and a handful of other city activities, including checking out the in-city riverfront rock climbing wall. Yup, ~50 feet high, the wall extends ~200 meters along the riverfront, and affords what looks like ~50 routes, maybe more.

Valerie flew in on Thursday the 10th, and had a meeting at University of Queensland with a colleague who is doing similar research on Friday. Saturday afternoon Tracy, Val and I all drove down to Evans Head, and small town south of Byron Bay. We got down there that evening so we could be up bright and early for our kayak tour of the Evans River estuarial region. Sergio, a friend of Tracy and Adrienne's runs kayak tours there, and we got a very personalized tour, and learned a tremendous amount about the local eco system. On our way back home, we stopped in the famous Byron Bay, a hippie enclave turned beach resort hotspot.

That night, we repacked and prepared for our 6am flight to Cairns. Stacy and Daniel picked us up at the airport and we drove up to Port Douglas where they have an apartment. I think I've rambled a little too much at this point, so I'm going to save the juicy details of our time in the Daintree for my post to the website, so here's the quick version:

I got to see two adult and three baby cassowaries, a goanna (monitor lizard), Boyds Forest Dragons, fruit bats, praying mantises, stick insects (one of which walked over my face), crazy spiders, and amazingly camouflaged katydids. Almost all of which I was able to photograph to some extent. We all went out to snorkel on the Great Barrier Reef, where we saw sting rays, a cuttlefish, giant clams (one was almost three feet long), stunning coral, and a usual assortment of amazingly colorful fish. Daniel and I also did a creek walk up to a beautiful set of waterfalls.

Ok, I'm all typed out. Sorry for making this so long. I'll be posting more details and pictures on the web site some day… not sure when.

I hope everyone is well!!!