Dave Down Under - Introduction 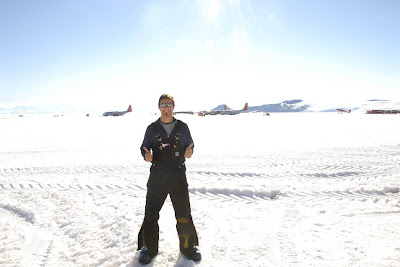 Greetings! David Argento here. Sean has asked me to send some dispatches from my upcoming field research trip to Antarctica so I thought I'd provide a little introduction...some information about me and this trip.

I am a graduate student at the University of Washington. I originally came from a background in Physics, and have a decent amount of experience in radiation field. I came back to the school when I found a research professor, Dr. John Stone, who was using radiation effects on rocks to date the length of time they had been at the surface of the earth. The field is referred to as Cosmogenic Nuclides, and beyond simply dating a rock, we can infer erosion rates, and uplift rates on the rocks. By dating the rocks, we can often date the greatest extent of a glacier by dating the rocks left in moraines, and ice sheet maximums. The source of this radiation is outside of the solar system. It is being actively researched by high-energy physicists and astronomers. So while the absolute source of this high-energy radiation is still uncertain, one thing is quite well established: it is remarkably reliable, and seems to have been quite stable in its magnitude for the last billion + years. We are only dating rocks out to ~2 million years maximum under ideal conditions, so this works out quite nicely.

An important aspect of this line of research for me is the outdoor component. I like reading; I like working on computers. But I also need an outdoors outlet, and it seemed like this avenue would bring just that. Unfortunately, for a variety of reasons, the bulk of my work over the last three years has been on computers. This all changed in dramatic fashion this last year. I have spent three weeks in Montana, two weeks in Sicily, a week in Rome, a week in Australia and now four weeks in Antarctica. This is all the research time, and does not count the fun traveling I was able to do because of it.

My advisor and I are about to head out to the McMurdo Dry Valleys, a region that is considered hyper-arid. It seems counter intuitive, since damn near the whole continent is covered in snow, but the vast majority of precipitation is dropped outside of these regions. So these valleys are essentially perma-frosted deserts. Because of the ultra-low precipitation, there is also ultra-low erosion. This results in rocks that are saturated in the radio-isotopes that are formed from cosmic radiation, because they’ve been “baking” as long as possible. So we're going to a spot to collect deep rock cores for calibration purposes.

The primary question we are looking to answer is just how significant the different radiation types are compared to each other. The bulk of the radiation we care about is neutrons. We tend to think about these the most, because they cause the greatest amount of isotope production at the surface of the earth. Muons (massive, energetic versions of electrons) are quite prevalent in number, but they’re kinda slippery. The don’t interact with matter as strongly as neutrons do. So while they don’t produce as much of the isotopic signal at the surface, they survive longer in their dive into the earth. Hence, they form a considerable signal of these isotopes much deeper in the earth when compared to neutrons. We will be taking deep (20-30 meters) rock cores at two separate sites, to be able to sample two types of rock at similar locations, and hopefully gleaning good empirical insight to these phenomena.
Email ThisBlogThis!Share to TwitterShare to FacebookShare to Pinterest
Labels: Dave Down Under, Field Notes, Science
Newer Post Older Post Home