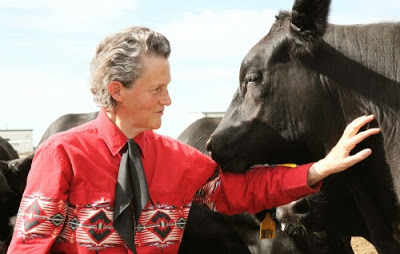 Temple Grandin is an American professor, author, and advocate for animal rights and autism. She was born in Boston, MA, to Richard Grandin and Eustacia Cutler. Grandin was diagnosed with autism at the age of 4 in 1951 which made her school years quite challenging but it also became a motivating element of her life, research, and advocacy work.

Grandin received her B.A. at Frankin Pierce College in 1970, her M.S. in Animal Science at Arizona State University in 1975, and her Ph.D in Animal Science from the University of Illinois in 1989. Grandin has also received honorary doctorates from the Ontario Veterinary College, University of Guelph and Duke University. She currently teaches livestock behavior and facility design at Colorado State University and consults with the livestock industry on the same topics. Grandin's work in animal behavior has revolutionized the livestock industry around the world by changing the way livestock are handled in order to reduce stress. Grandin's work also proved valuable in human behavior and she is also well known as the creator of the squeeze machine used to calm hypersensitive people.

Grandin has appeared on many TV shows including 20/20, 48 Hours, Larry King Live, PrimeTime Live, the Today Show, as well as being featured in dozens of newspapers and magazines that include Discover, Forbes, People, Time, the New York Times, and U.S. News and World Report. In 2010, she was a TED speaker and Time Magazine named her one of the 100 most influential people in the world. Grandin herself has authored over 400 articles in both scientific journals and livestock periodicals and eight books with Animals in Translation and Animals Make Us Human both making the New York Times best seller list.