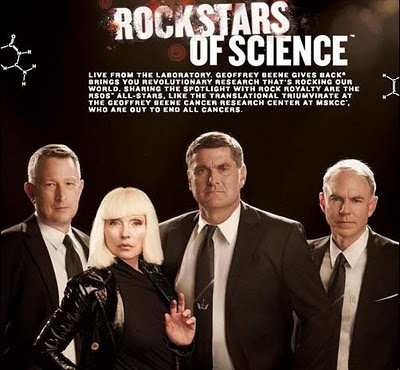 As a subscriber to GQ magazine, I was pleased to see the 2010 Rock Stars of Science (Rock SOS) Campaign in GQ's 2010 'Men of the Year' (December 2010) issue. Given how excited I was about the 2009 Rock SOS Campaign, I was psyched to see things evolve a bit for 2010. There were more scientists featured, more diversity among the scientists, and some great new musicians lending their support to science and medicine.

Rock SOS certainly raises awareness for the scientists and research highlighted in each year's campaign but many science advocates are looking to the campaign to raise awareness about science in general. Chris Mooney has done a great job of following the launch of and response to the 2010 Rock SOS Campaign over at his blog with Sheril Kirshenbaum, The Intersection. There's no doubt that science and scientists need some good PR and this is a great campaign that gets a lot of attention. But I think that the 2010 campaign may fall short of this opportunity for two reasons.

The first reason has to do with the overall look and feel of the 2010 campaign, it's not all that inspiring. To be honest, after seeing the pages and website, I had a SNL Debbie Downer “wah-wah” sound effect moment. Compared to the 2009 campaign, this year's images are dark, flat, and stoic (the suits and bow-ties on the guys don't help). The pages are missing the cool 'rock vibe' that is a key part of making the campaign so compelling. The 2010 images have a look/feel more like a Sopranos or Law & Order ad than a hip spread with real life rock stars. I guess if you really stretch you could say that the pages have a bit of a Battlestar Galactica thing going, which could be cool but that would just mean that they are dark, a bit depressing, and not necessarily pro-science. In addition, it is pretty clear that some of the individuals were photoshoped into the group which is just poor creative. A better stylist and creative designer could have solved these problems easily.

The second reason that the 2010 campaign may not raise the visibility of science and scientists in general is that is focused on medical science and research. This makes sense since Geoffrey Beene supports many nonprofits in this sector (to the tune of $106 million). But this sends a subtle message that medical science and research is more legit than other sciences and there are certainly rock stars in the world of physics, botany, and many in the social sciences. Perhaps Rock Stars of Biomedical Science and Research would be a more appropriate title...but that doesn't make a very good acronym.

Granted, Geoffrey Beene didn't intend for this campaign to be a PR boost for science in general. Rather, it was created to raise awareness for Geoffrey Beene, their philanthropic efforts, and - most importantly - scientists and their groundbreaking research. But I do think an opportunity was missed here. We need to make science aspirational and using pop culture is certainly one way to do this, it just needs to be used wisely.