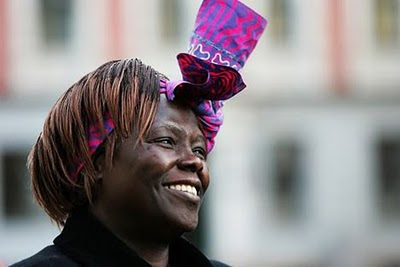 Throughout the 1970s and 1980s, she joined and lead many women's rights and environmental organizations in Kenya. In 1986, the work she began in 1976 working with women to both reduce poverty and restore ecosystems by planting millions of trees progressed to the become the Green Belt Movement that would spread across much of Africa. Maathai was elected to Kenya's parliament with an overwhelming 98 percent of the vote in 2002 and from 2003- 2007 she served as Assistant Minister for Environment and Natural Resources.

Maathai received the Nobel Prize for Peace in 2004 for her "contribution to sustainable development, democracy and peace" becaming the first African woman and the first environmentalist to win the Nobel.

In addition to the Nobel, she received many other prizes and awards for her efforts for democracy, human rights, and the environment including the Goldman Environmental Prize, Conservation Scientist Award from Columbia University, Edinburgh Medal (for "Outstanding contribution to Humanity through Science"), Grand Cordon of the Order of the Rising Sun of Japan, and the Legion d’Honneur (France). Maathai was listed 6th in the Environment Agency's Top 100 Eco-Heroes, included in UNEP's Global 500 Hall of Fame, honored by Time Magazine as one of 100 most influential people in the world, and by Forbes Magazine as one of 100 most powerful women in the world.