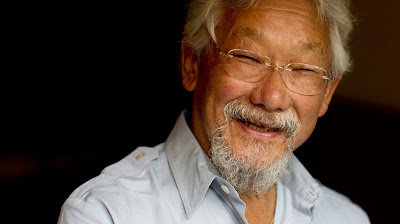 At the age of six, Suzuki, along with his mother and two sisters, were interned in British Columbia during the World War II after Suzuki's father had been sent to a labor camp. After the war, the Suzukis were forced to move to Ontario. Suzuki credits his father and his time spent at the camps in Canadian forests for cultivating his passion for nature.

Suzuki completed his BA at Amherst College in 1958 and in 1961 received his Ph.D in zoology from the University of Chicago. Suzuki was then professor in the University of British Columbia Genetics Department until he retired in 2001. Throughout his career, Suzuki has received 23 honorary doctorate degrees. Although Suzuki has participated in many radio and television projects, he is perhaps best recognized as host of The Nature of Things, a CBC science series that has been syndicated in over forty countries.

Suzuki is the recipient of the Order of Canada, the Order of British Columbia (1995), UNESCO’s Kalinga Prize for Science, the Canadian Geographic Citation of Lifetime Achievement, and the Right Livelihood Award among many others. Suzuki is an outspoken environmentalist and in 1990 co-founded the David Suzuki Foundation with Tara Cullis "to protect the diversity of nature and our quality of life, now and for the future". Suzuki's work with his Foundation offers him the opportunity to speak on a diversity of topics ranging from clean energy and sustainable development to climate change and fisheries.