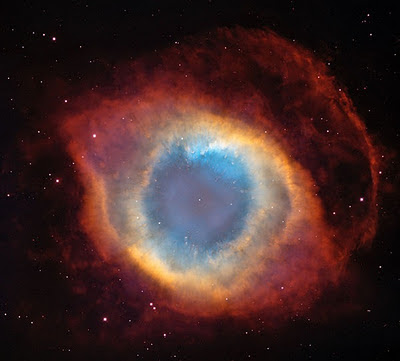 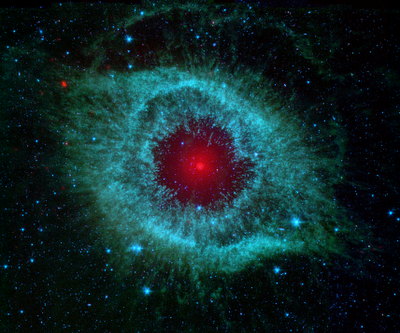 Image credit: NASA, JPL, and K. Su
Here at Future-ish, we love astronomy and we love cocktails. So to prep our fans (and ourselves) for those stellar weekend cocktail conversations, we are pleased to offer our Cocktail Astronomy post each Friday.

OK, we admit it, we love zombies too. So with Halloween just around the corner, we wanted to bring a bit of our zombie crush into Cocktail Astronomy. Check out the nebula above...talk about a zombie transformation!? Discovered by Karl Ludwig prior to 1824, NGC 7293, the Helix Nebula (often referred to as the 'Eye of God)', is actually one of the most well known nebulas in astronomy and pop culture. It is a large planetary nebula located in the Aquarius constellation located about 650 light-years from Earth.

The first image from 2003 - pre-zombie - is a visible light image produced by combining data from the Hubble Telescope and NSF's .9 meter telescope at Kitt Peak. The second image - post-zombie - is an infrared image of NGC 7293 taken by the Spitzer telescope in 2007. Our newly named 'Zombie Nebula' It is a great example of how different telescopes with different spectral analysis reveal unique information about the objects being observed.

So have the bartender whip up one of those spooky Halloween cocktails (we suggest a 'brain tumor' or 'pina ghoulada') and let your friends know that zombies have invaded the cosmos. We're just happy that all the zombie dancers around the globe participating in the annual Thrill the World event that celebrates Michael Jackson's Thriller can look up into the sky and know that the big zombie eye in the sky is staring (hungrily) right back at them.
Email ThisBlogThis!Share to TwitterShare to FacebookShare to Pinterest
Labels: Astronomy, Cocktail Astronomy, Halloween, Helix Nebula, Hubble Space Telescope, Nebula, Zombies
Newer Post Older Post Home