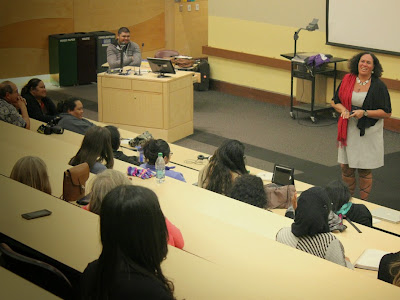 First and foremost, Sia Figiel is a single parent to 2 growing sons and an aunt to 3 nieces and 7 nephews. Ms. Figiel is also a beloved Samoan novelist, performance poet, and artist.

Ms. Figiel grew up in the village of Matautu Tai, Samoa where traditional Samoan song, dance, and poetry were key elements of her community and upbringing. She attended schools in Samoa and New Zealand and later began university studies in New Zealand and completed her BA in History at Whitworth College in the United States. She has also held residencies at the Institucio de les Lletres Catalanes in Spain, the Pacific Writing Forum at the University of the South Pacific, the University of Technology in Sydney, and the East West Center – Center for Pacific Islands Studies at the University of Hawaii.

Ms. Figiel won the Polynesian Literary Competition in 1994 for her poetry and wrote her first book, Where We Once Belonged, in 1996 for which she was awarded the Commonwealth Writers' Prize for fiction, South East Asia/South Pacific region in 1997. Where we Once Belonged was followed by the novels The Girl in the Moon Circle and They Who Do Not Grieve along with a collection of prose-poetry To A Young Artist in Contemplation. Ms. Figiel has also recorded performance poetry with the poet Teresia Teaiwa in the CD TERENESIA.

Ms. Figiel's work has been translated into many languages and she has presented her work in cities including Paris, Berlin, Barcelona, New York, and Honolulu. She is the first Pacific Islander to perform poetry at the Shakespeare Globe Theater, London. Ms. Figiel continues to travel extensively, representing Samoa and the Pacific Islands in literary festivals around the world.

In 2013, Figiel also began working as a diabetes activist, launched with her in-your-face (literally and figuratively) YouTube video, Sia at the Dentist in which her teeth are removed due to her own diabetes-related health issues. She focuses much of her advocacy work on Pacific Islander communities but - like her creative works - her experience and message have universal appeal. Figiel also serves as a role model by including her entire family in eating healthier and becoming more active. She has become a triathlete and has lost well over 100 pounds in her efforts to challenge her diabetes.

We are pleased and honored to have Sia Figiel as a contributor to our online magazine, Confab.