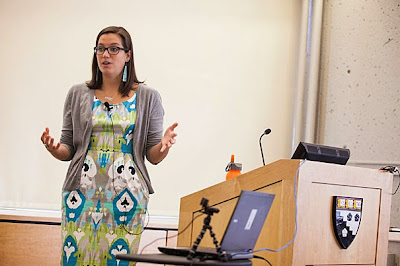 Image credit: Melanie Rieders via Harvard Gazette
Adrienne Keene (Cherokee) is a Native American researcher and blogger. Keene received her BA in Cultural & Social Anthropology and Native Merican Studies from Stanford University in 2007 and earned her Doctorate in Education from Harvard in 2014. Keene's graduate research focused on Native (American Indian, Alaska Native, and Native Hawaiian) access to higher education and the role of pre-college access programs in Native student success. Keene was a recipient of the Harvard University Presidential Scholarship and her dissertation was selected for the 2013-2014 National Academy of Education/Spencer Dissertation Fellowship. She was also the first recipient of the Harvard Graduate School of Education Kolajo Paul Afolabi Award for Educational Justice in 2013.

Keene has volunteered with College Horizons, a nonprofit organization that assists Native students with college applications for over 10 years.

Keene was added to our Citizens of the Next Century List in 2013 and was named as our fourth Miss Next Century in 2014.