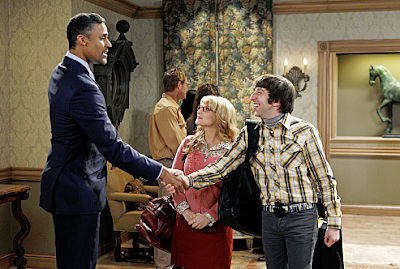 Former Celtic and Lakers basketball player turned actor, Rick Fox, just became the latest addition to the list of scientists in film. Fox made a short appearance in Season 4: Episode 13: The Love Car Displacement as Glenn, Bernadett's former Professor (not sure what subject, but he is researching global warming) and ex-boyfriend...the humor being that he is Wolowitz's exact opposite on the hunk spectrum. I always love seeing pop culture (in this case a celebrity athlete) intersect with world of science. Fox did a great job so I hope to see him back soon and often. Catch the full episode here. Fox appears at 08:15.
Email ThisBlogThis!Share to TwitterShare to FacebookShare to Pinterest
Labels: Actors, Athletes, Big Bang Theory, Rick Fox, Science, Television
Newer Post Older Post Home