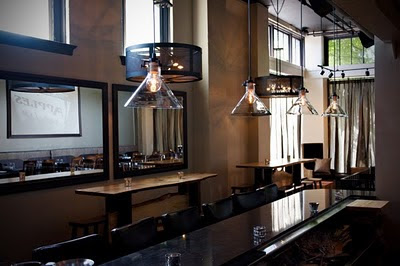 Modern Wild West Meets Molecular Gastronomy
Let me begin my review of Spur Gastropub in Seattle by saying I went into the experience with much anticipation and very high expectations. As a full-on science, design, and culture geek I get pretty excited about 1. a new restaurant. 2. a restaurant with a clear concept, and 3. a restaurant that features the major foodie trend of molecular gastronomy. Spur had all this and more. Although there were a few things that keep me from giving Spur five stars, I will say that every part of my dining experience at Spur was above average...the atmosphere, the food, and especially the service. It was the perfect destination for a cold January evening in Seattle.

Website
My first impressions of Spur came from the website. With one click, it is immediately apparent that a diner is in for an evening of innovative ideas, drinks, and dishes. The site presents a clean, crisp look and feel with images of modern ingredients and dishes sprinkled in with photos of objects from the wild west, including a very authentic Western spur. It was also clear that Spur has received complimentary reviews from both food professionals and diners alike.

Atmosphere
One step inside Spur, and it is clear that chef/owners Brian McCracken and Dana Tough have put a lot of thought into their cozy corner space. The restaurant design is, at the same time, both modern and rustic. Wood trim and natural log tables coexist with hip light fixtures and ambient projections of black and white Seattle scenes. I offer a few more thoughts on the atmosphere below in the ‘opportunities’ section.

Menu
The menu offered up a page of cocktails and libations on one side and dining options on the other. But don't be fooled by its simplicity, the choices on each side are many and diverse. Once again, it is clear that Chefs McCracken and Tough put a lot of thought into Spur. I chose the Pimm's Cup as my cocktail. It incorporated Pimms #1, lemon, cucumber, and basil. It was wonderfully refreshing. The alcohol was present but clearly played only a supporting role in the creation. I very much look forward to returning to try some of the other creations, listed on the menu and non-listed (rumors are they are some of the best).

Next up was their house brioche. It was a simple little loaf served by itself. It was a smidgen savory on its own so I had no problem finishing it off quickly. That said, it was also a bit dry and would have made an exceptional host for a clever butter, oil, sauce, or other dipping medium.

Following the brioche, I ordered the Parisian Gnocchi with chanterelles, cauliflower, and parmesan. Lucky for me, they had some special truffles in house so this gnocchi was particularly special. The dish deserved a full on OMG. Though not stunning (perhaps my bad for having too high of expectations of the molecular gastronomy I might see and taste at Spur), the presentation was certainly beautiful. Once I took the first bite, I was convinced. This was one of the best gnocchi’s I’ve ever had. The flavors and textures were out of this world with our fantastic NW chanterelles juxtaposed to the crunch of the parmesan. My only wish is that I still had brioche left to take advantage of the leftover sauce.

After the gnocchi, I moved on to the salmon crostini with mascarpone. Another slam dunk. Three small crostini arrived on the plate with perfectly cubed portions of slightly smoked salmon. The cubes suggested a little of the molecular gastronomy that I’d been waiting for, but then again, any restaurant could cube their salmon. However, once again, it was the perfect marriage of flavors and texture. Yes, this little app is ubiquitous in the NW, but there was something new in Spur’s version, perhaps the pickled shallot. I could have eaten dozens for sure. For the entrée, I chose the Wagyu Sirloin with quinoa, truffle, and root vegetables. This masterpiece arrived with a much larger single cube of perfectly cooked steak and was accompanied by a fantastic little heap of vegetables. The dish definitely had an edgy look with the single cube of steak and matrixed sides, which, again, any chef could conceptualize but just don’t. At Spur, the presentations may be subtle but intentional and I found that the more items I experience, the more the gastro concept came through. The steak itself was DREAMY and the side that included the quinoa, truffle and vegetables on top of a mash was an absolute perfect pairing.

The portions are fairly small at Spur (which I’ll mention later) so I decided to try one more item on the menu before dessert. The bigeye tuna crudo had been calling me all night so I finally gave in. The crudo was mixed with caviar and served wrapped in thin avocado slices and dainty radish slivers and caviar. I love tuna, avocado, and caviar and this little number didn’t let me down. The salted crudo plus caviar was a bit too salty for my taste (but many things are) but I had no problem finishing it off and would have happily eaten one or two more servings.

Last and absolutely not least was my dessert – truffle ice cream. Yes, more truffle…a perfect way to end an evening of much truffle. The ice cream incorporated truffle with muscovado and a hint of ginger. The fuilletine and vanilla chantilly on the side elevated the experience even more. This was moment at Spur I’d been waiting for, the WOW moment. Maybe there wasn’t any fancy process involved, but the dessert looked far out, tasted far out, and will last in my memory far into the future. Spur actually changes out their desserts quite frequently so if you do get a chance to go, cross your fingers that the universe will make truffle ice cream available that night.

Service
Simply put, the service at Spur was exceptional. Our particular server was fun, knowledgeable, gracious, and forgiving. She and other staff checked in frequently, filled waters, cleared courses quickly, and offered many suggestions and opinions on things to try. Early in the evening I expressed my interest in the molecular gastronomy elements of the menu. Our waitress very graciously responded that there wasn’t a whole lot on the current menu that was “way far out there” due to seasonal restrictions but pointed out a few items of interest and did mention that many of the dishes used a sous-vide method. In addition, when she discovered that my friend wasn’t all that fond of a cocktail he’d received, she removed it and recommended another that was fantastic. Spur wasn’t packed the night I dined, but there was a pretty consistent crowd of folks throughout the evening so I don’t think my experience was out of the ordinary.

Pricing
My personal take on meal prices is interesting. I’m lucky enough to be in a position where I can have meals at fine restaurants on occasion without price being an issue. That said, I do put a lot of consideration into whether a meal was ‘worth’ what is being charged. If the prices of items outpace the quality or quantity of food I’m expecting and/or the experience over all, I simply take note of that fact and leave thinking “that was a little pricy”. Spur wandered into that range for me…just a little. The food was fantastic and worthy of fine dining prices, but had some of the prices for cocktails and menu items been $2-$5 less expensive, I wouldn’t have noticed my perceived ‘inbalance’ and wouldn’t have included it in my review. That said, I’d go back and pay those prices again, Again, and AGAIN to try out some of the other cocktails and menu items.

Opportunities
Besides some a few small menu details mentioned above, there were several other things that I felt could be improved upon to make the ‘Spur experience’ more in line with the concept, or at least the concept I was expecting. First, more of the gastro stuff would be awesome. It may indeed be my bad for having such high expectations, but Spur does do so much cool stuff, they would do really well to expand the experience. Examples include the brioche I mentioned above. Seattle is crazy for its oil/vinegar or oil/salt bread dipping so Spur could easily notch this trend up in some way. Or maybe something crazy with the water. It’s not a big deal anymore, but when restaurants started serving cucumber water at the table, people went nuts. Second, the interior design of Spur included a lot of great elements, but it missed the mark on some things as well. For instance, there is a clear modern yet rustic/Western vibe going on. For whatever reason, after a few steps into the restaurant, my mind jumped immediately to the series, Firefly, in which the wild West meets the 26th century. The creative folks on Firefly got the ‘space western’ look and feel down and I think watching a few episodes (or the whole series because it is SO GOOD) might have give Spur some further inspiration for their space. On one hand you have the really hip light fixtures, mod booths, and very cool natural log tables while on the other hand you have boring wood chairs, lots of empty wall space, and bathrooms with completely different vibes (one is Asian, the other kind of a ‘nouveau renaissance’). Having worked at Nordstrom for 13 years, I always notice the ‘uniform’ choices too. All the staff looked great at Spur but I couldn’t help but think of Firefly again. Somehow Firefly pulled off ‘futuristic Western wear’, so again, I was dreaming up ways to have the staff look awesome and further enhance the Spur concept. The final thing that stood out to me was the music. Great classic rock is great but it didn’t quite vibe with the modern western. Throw in some Cowboy Junkies, Uncle Tupelo, Wilco, Brandi Carlisle, other alt country, and/or some old school country and it would seal the Spur deal. Don’t get me wrong, I loved my Spur experience – all around – and I’ll go back soon and often. I’m just a frustrated wannabe designer so gotta get this stuff out. Go to Spur and enjoy!