The Smart Set Lives in Seattle 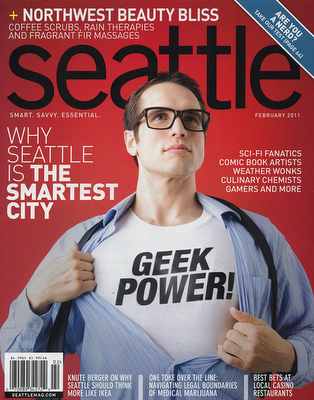 2.15.11 - The February 2011 Seattle Magazine features an issue that we here at Future-ish have known all along...Seattle is the smartest (and yes geekiest) city around. And we're proud of it! From geek chic and gastro pubs to internet icons and nifty nerd hangouts, the issue is an encyclopedia of 'subject-matter obsessed' scene in Seattle. Perhaps we need to add a few more items to our Geek Lists for Seattle specifically. Get out and pick up an issue for some fun reading. Then put on those local/organic jeans and your favorite grunge cardigan and warm up that latte...Seattle just became the capital of yet another trend that's sweeping the globe. Smart is the new black.
Email ThisBlogThis!Share to TwitterShare to FacebookShare to Pinterest
Labels: Geek Chic, Seattle Magazine, The Smart Set
Newer Post Older Post Home