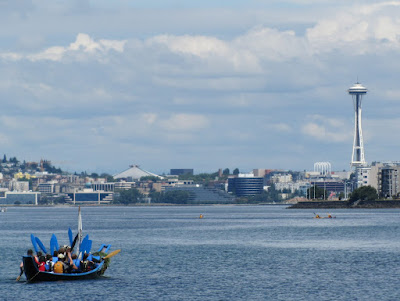 I just finished up the 2011 Paddle to Swinomish, the annual Tribal Journey that takes place in the Salish Sea. Once again I was honored to travel with Phil Red Eagle's Carver's Camp and paddle with the Oliver Family Canoe Club (OFCC) in the Willapa Spirit Canoe. This year's Journey started at the Squaxin Island Tribe in Shelton and ended at Swinomish near Anacortes, WA. 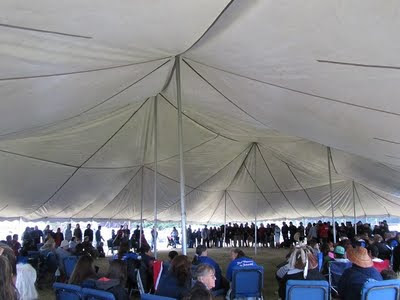 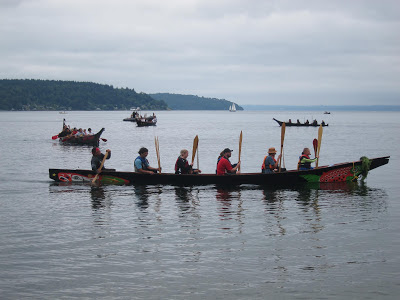 My first paddle day was the leg from Nisqually to Puyallup. This was especially meaningful for me as we passed through the traditional land and waters of the Steilacoom Tribe. After seven years in Nebraska, I grew up in Steilacoom and recently had been volunteering with the Steilacoom Tribe for many years. I had been out in Steilacoom waters on fishing boats and ferries but paddling slowly through the waters in a canoe was really incredible. Shooting through the Narrows was a lot of fun as well. We landed with Protocol at Owens Beach in Point Defiance Park. All the Canoe Families thought that was the end of the leg but found out we actually had another eight miles to go to get to the Puyallup marina where the canoes would be tied up for the night. With deteriorating weather and many Canoes with only three paddlers for the 'short pull around the corner', many - including us - decided to get a tow to the marina across Commencement Bay. Justin volunteered to ride out the tow in the Canoe...far from a smooth ride home. 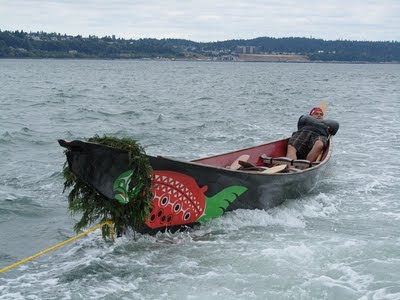 Justin rides out the tow to Puyallup
We camped that night at Chief Leschi Schools. During the Protocol that night in the gym, many of the Canoe Families joined in an honor song for Emmett Oliver, one of the founders of the Canoe Journey movement. It was very moving. A song honoring Mothers occurred later in the evening that was also very inspiring. 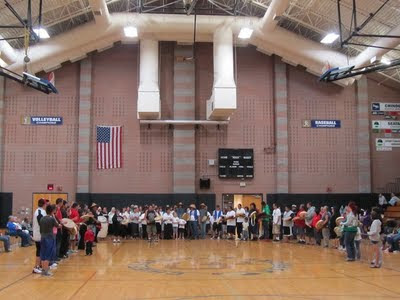 Honor song for Emmett Oliver at Puyallup
The next paddle leg was from Puyallup to Muckleshoot. It was a 26 mile leg and it was a beautiful day. We took a rest at Point Robinson Park on Vashon Island and then arrived at Alki Beach around 2:00pm. The picture above is from that landing. Although Alki and Seattle are actually Duwamish territory and water, they are not Federally recognized so the official host Tribe is Muckleshoot. Most of the Canoe Families shuttled into Muckleshoot to spend the night. The Oliver Family all traveled up to Suzanne Oliver's house and spend the night there and made a quick stop at my home in Ballard and then took the ferry over to Suquamish to spend the night in order to help Phil Red Eagle make copper rings for the Tribal Journey Copper Ring Ceremonies he leads.

Upon arriving at Suquamish, I went down to the Suquamish House of Awakened Culture and found my good friend Barbara Lawrence and her family and friends just finishing up the dedication ceremony of a new Memorial Pole in honor of her Father, Charles Russell Lawrence, a survivor of the boarding school system, survivor of the T.B. hospitals, one of the first educated (electrical engineer) Tribal Members, a civic leader, a civil rights advocate, a peacemaker, a WWII veteran (an infantryman in the invasion of Normandy), the single individual who brought Chief Seattle Days back into existence after many years of absence, and a Suquamish Tribal Council Chairman several times. It was the 50th anniversary of his death so the pole, finished just in time for the Tribal Journey landing, was a beautiful way to commemorate this important man. 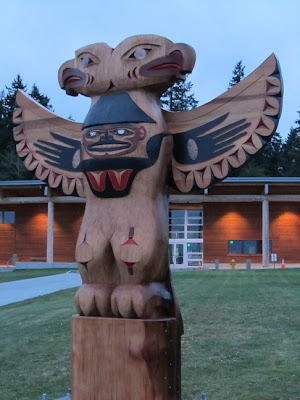 Memorial pole for Charles Lawrence
The next morning, many of us traveled back over to Seattle to take part in birthday festivities at the Duwamish Longhouse for Art Durand (Elder, musician, and storyteller that often travels with Phil Red Eagle's Carver Camp), Mike Evans (Elder, Skipper of the Blue Heron Canoe, singer, drummer, Lushootseed language teacher, etc., etc.), and Austin (one of the youth pullers in the Blue Heron Canoe). It was a wonderful party with many stories, dances, and humor. Then it was back on the ferry over to Suquamish. The dinner and protocol that night at the Suquamish longhouse was better than any I could remember before. I also finally caught up with Melanie Cheung, a Maori neuroscientist from New Zealand that I had met several years ago. Melanie was on a ten week trip to the States and made sure the her time included paddling in the Journey. She happened to be staying with my friend Barbara and pulling with the Suquamish youth. Though we're mostly Facebook friends, she's still one of my favorite people in the world. I was also able to introduce her to Justin Finkbonner who I met a couple years back during the Paddle to Suquamish (in a pic above). Justin's a hard core puller but also has a great positive and fun attitude. As one young female puller told he, he's "one of the coolest guys on the Journey" and he is looked up to by Elders, adults, and youth. Justin's actually part of the reason I paddle with the OFCC...he had paddled with them in the past but left to skipper his own canoe last year. The Olivers needed "a big guy" to fill Justin's shoes so since Phil Red Eagle didn't have a Canoe that year, they asked if I could help them out. I was of course honored to join the Oliver Family in the Willapa Spirit, an Honor Canoe for Emmett Oliver. This year, I got to paddle alongside Justin with the OFCC so that was pretty awesome. Anyway...Justin has also been involved with some great jobs and projects so seems to know everyone. He also spent some time in New Zealand on a cultural exchange so he and Melanie had lots to talk about right away.

After dinner that night, I headed home and started packing form my trip to Maui. Even though my time on the Paddle to Swinomish was short this year, it was by far one of my favorite Journey experiences. A big " hui' " (Lushootseed for 'see you later') to the Paddle to Swinomish folks...Oliver family and friends, Carver's Camp, Squaxin, Nisqually, Puyallup, Muckleshoot, Suquamish. "Tigwicid" (Southern Lushootseed for 'thank you') to Skipper Suzanne Oliver, fellow pullers, and all the support crew along the way.

Canoes on Alki
And finally...as I mentioned in an earlier post, a good friend on Maui, Charles Kaupu, crossed over to the spirit world the week prior to the Journey. He was a wonderful man who lived Aloha in every way. He dedicated his life to maintaining Hawaiian traditions and sharing those traditions with people around the world. To honor him during the Journey, I wove and wore a ti leaf lei (mahalo to Kiapu Wolfe at Hawaii General Store in Seattle for showing me how) that would eventually travel to Maui with me where I would release it into the ocean to honor him in a good way, and a Hawaiian way. Below is a pic of the lei with the copper ring that is worn by Journey pullers that have have agreed to follow the 10 rules of the Canoe. The stone in the center with a Hawaiian paddler petroglyph comes from Maui as well, I picked it up and added it to the ring since I paddle outrigger canoes as well. Aloha Kumu Charles. 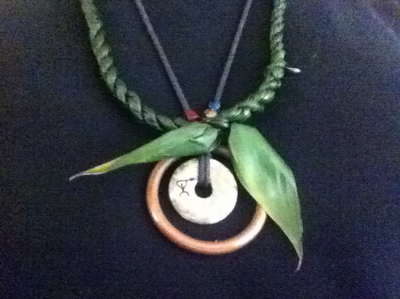 Articles on the 2011 Paddle to Swinomish: