Music, Art, & Architecture at the Guggenheim 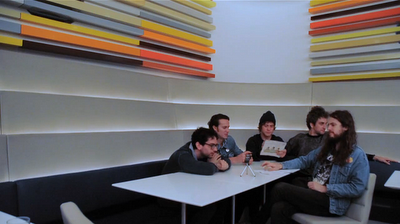 MGMT, the neo-psychedelic band which achieved mainstream renown for its electro-pop gems such as “Kids” and “Time to Pretend,” recently made two appearances at the Guggenheim Museum in New York to play at the afterparty for the museum’s 2011 International Gala. This year’s gala featured a retrospective of the works of the artist Maurizio Cattelan.

Cattelan’s hyperrealist art is known for being subversive, and often shocking. To complement this aesthetic, MGMT performed new music written specifically for the occasion. They stated in a press release:

“We’re creating a musical experience that works for the building, and for the construction and presentation of the Cattelan exhibition. The art exhibition is done in a completely original way, so it deserves music which is completely original. The Guggenheim performance won’t be a traditional MGMT show, but it will be _______.”

The music is largely in the vein of their experimental sophomore album, Congratulations, rather than the more radio-friendly Oracular Spectacular. The performances occurred on November 10 and 11. EM

A clip from the show is available below: