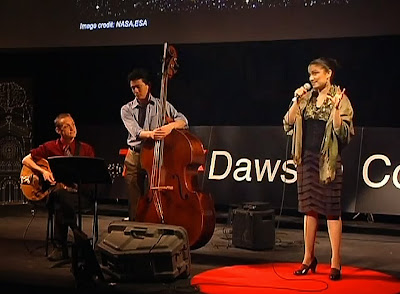 Diane Nalini de Kerckhov is a Canadian physicist, Rhodes Scholar, and jazz singer. She received her PhD in Materials Science from Oxford in 1999, completed post-docs at Oxford from 1999 to 2002, and was an Assistant Professor in the physics department at the University of Guelph from 2005 until 2011 when she joined Environment Canada as a policy analyst.

De Kerchkov's career as an international jazz singer was rooted in her training in ballet, jazz, and modern dance. In 2001, she was one of two finalists for the UK's Young Jazz Vocalist of the Year awards and was nominated for the Grand Prix de Jazz General Motors at the 2002 Montreal International Jazz Festival. De Kerchkov writes and sings in four languages and has released four CDs. Her most recent collection, Kiss me Like That, was inspired by her work in physics and astronomy. She performed at events around the world including events for President Bill Clinton and Sir Paul McCartney.

Below is her May 2013 talk and performance at TedxDawsonCollege: