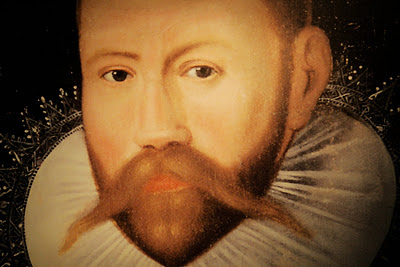 Image credit: Mads Nissen for Politiken.dk
Here at Future-ish, we love astronomy and we love cocktails. So to prep our fans (and ourselves) for those stellar weekend cocktail conversations, we are pleased to offer our Cocktail Astronomy post each Friday.

This week we join our fans around the world in celebrating Movember, the annual moustache growing (well, we've seen a few ladies and gentlemen glue them on too...in an "Mo" emergency of course) charity event held during November each year that raises funds and awareness for men's health issues, particularly prostate, testicular, and other forms of men's cancer.

We couldn't think of a better way to celebrate the event than to raise a cocktail in honor of the very famous and very moustachioed 16th Century Danish astronomer, Tycho Brahe. Brahe made many discoveries in the fields of astronomy and alchemy, but he is most noted for his his incredibly accurate observations of our solar system and many stars, noting a supernova in 1572, and providing evidence that comets are heavenly bodies rather than weather related. Brahe's celestial mechanics and detailed star maps were later used by Johannes Kepler in his theories of planetary motion.
Email ThisBlogThis!Share to TwitterShare to FacebookShare to Pinterest
Labels: Astronomy, Cocktail Astronomy, Johannes Kepler, Movember, Science, Tycho Brahe
Newer Post Older Post Home