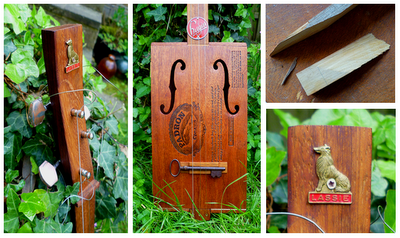 Originating in Hawai'i in the 19th century, the 'ukulele is a singular instrument. Its popularity waned after Tiny Tim but the ukelele is enjoying a resurgence lately. One example is the side project of Pearl Jam's Eddie Vedder, whose quite literally-titled album Ukelele Songs was released earlier this year.

Rather than buy a ʻukulele, you can handcraft one from reclaimed and found materials, as Shelley Rickey did with the Hugin' Lassie. Cigar boxes are commonly used for the body of the instrument and, on the one pictured, the artisan found the piece of hardwood used for the instrument's neck on the street. Another of Rickey's cigar box ukeleles was featured in BUST Magazine's music issue this summer. She included this detailed tutorial about how to upcycle a ukelele for yourself. BP