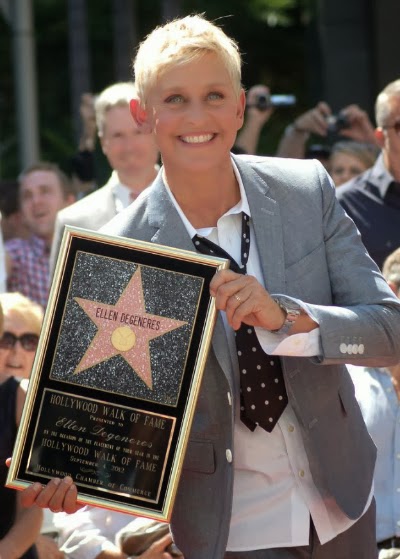 Image credit: Angela George
Ellen DeGeneres is an award-winning American actress, author, comedian, spokesperson, and television host. In addition to her extensive acting and comedy career, since 2003 she has hosted The Ellen DeGeneres Show (aka "Ellen") which features celebrity interviews, musicians, new products, games, and many human-interest stories.

DeGeneres has won numerous awards, including Daytime Emmy Awards, Emmy Awards, and People's Choice Awards. She has also hosted the Emmy and Academy Awards. DeGeneres received the Tulane President's Medal in 2009 and the Mark Twain Prize for American Humor from the Kennedy Center for the Performing Arts in 2012. She landed her star on the Hollywood Walk of Fame in 2012.

DeGeneres and her partner, Portia de Rossi, are vegans and DeGeneres has regular segments on her show called "Ellen's Healthy Living" that feature tips and recipes for going vegan. She has raised awareness and money for issues ranging from animal rights and bullying to breast cancer and relief efforts after Hurricane Katrina. Secretary of State Hillary Clinton named DeGeneres a Special Envoy for Global AIDS Awareness in 2011.

The groupies of Studio F here at Future-ish are HUGE fans of DeGeneres for several reasons. She has had many STEM (science, technology, engineering, and math) guests on her show ranging from actress Danika McKeller to young inventor Peyton Robertson. She also often highlights the work of outstanding teachers across the US which will always get a big gold star and an A+ from us. She is also an admirer of great design both on her show and in her personal life. Even more fabulous...DeGeneres came out publicly as a lesbian in 1997 and she has been an outspoken advocate and role model for the LGBT community ever since. She is a champion of diversity in every way and her sign-off for each show, "Be kind to one another!" has become a mantra here at Future-ish.

DeGeneres was named our Queen of The Smart Set for 2014.