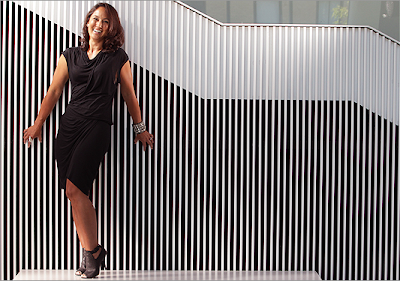 Image Credit: Essdras M Suarez/ Globe Staff
Cynthia Breazeal is an Associate Professor of Media Arts & Sciences at the MIT Media Lab and Director of the Robotic Life Group. She is best known for creating the 'animated' and expressive robot Kizmet and her work in robotics continues to bring her understanding of human psychology and interactions to the task of making robots more socially and emotionally human. Breazeal has published many articles, appeared in television shows, and has been featured in several magazines. In September of 2011, Breazeal was named one of the 25 Most Stylish Bostonians by the Boston Globe which makes her one of our newest Glamour Geeks.