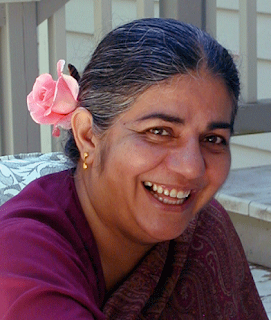 Dr. Vandana Shiva is a philosopher, ecologist, activist, editor, and author of many books and articles. She earned her MA in Philosophy of Science from the University of Guelph in 1977 and her PhD in Philosophy of Science from the University of Western Ontario in 1978. She is a passionate advocate of socially and ecologically sustainable development having left formal academia when she realized that dominant science and technology seemed to be serving the interests of global corporations rather than society. In particular, Dr. Shiva has focused on issues in agriculture, such as genetically modified organisms, women's rights, and globilization. In 1991, she founded the Navdanya - Research Foundation for Science, Technology and Ecology. Dr. Shiva has lectured extensively throughout the world and has been a visiting professor at the Universities of Oslo, Norway, Schumacher College, U.K., Mt. Holyoke college, U.S., and lectures at York University, Canada, University of Lulea, Sweden, University of Victoria, Canada among many others. In addition to her academic and research contributions, Dr. Shiva has also served as an adviser to governments in India and abroad as well as NGOs such as the International Forum on Globalisation, Women's Environment and Development Organisation and Third World Network.