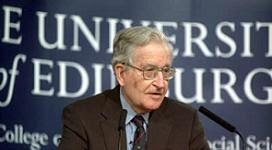 Dr. Noam Chomsky is Professor Emeritus of Linguistics at MIT. Dr. Chomsky's theory of generative grammar in Linguistics and contributions to the cognitive revolution of the 1950s in Psychology are considered among the most important developments in their respective fields. Dr. Chomsky's generative model and the Chomsky hierarchy continues to influence many other fields, from computer science to immunology. Due to his stern criticism of US foreign policy and politics since the 1960s, Dr. Chomsky's ongoing political activism has garnered him the title of one of America's most active and controversial liberal public intellectuals. Dr. Chomsky has authored numerous books and articles on both academic and political topics. In addition, he has appeared on many television series and travels extensively giving lectures and commentary on many topics.