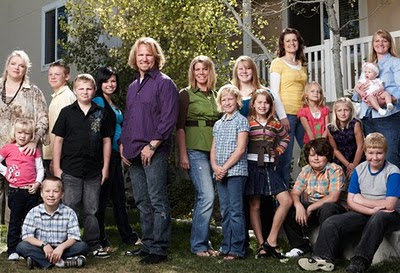 The idea of plural marriage (aka polygamy), has been around - and controversial - for a long time. Recently, however, plural marriage has been getting more exposure and 'non-judgemental' treatments. We reported on Big Love making some waves in the past and a new reality TV series only adds to the development of issue by giving us an inside look at the lives of a real-life plural marriage family. TLC's Sister Wives that began airing in September of 2010 has certainly opened the eyes, hearts, and minds of many viewers to the challenges and opportunities that exist within a plural marriage family. Sister Wives follows the family of Kody Brown, his wives Meri, Janelle, Christine, and Robyn, and their sixteen children. The series is revolutionary for both Mormonism and society in general in that it portrays a plural marriage family in such an open and honest way. The show, which received high ratings and has been renewed for a second season, has certainly brought the concept of plural marriage further into the mainstream. Whether the Brown family and plural marriage will be 'judged' by viewers and society is yet to be seen.

One thing for sure, the idea of 'modern marriage' continues to evolve as we move further into the 21st century and beyond. To follow this topic, click on the "Modern Marriage" label below.