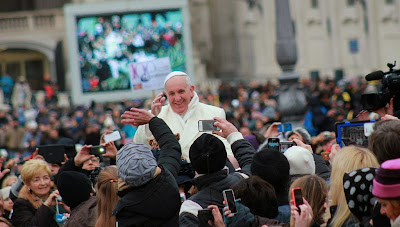 Prior to entering the Villa Devoto Seminary in 1955, Bergoglio had earned a diploma as a chemical technician and then worked as a lab technician for a few years. He earned a graduate degree in philosophy in 1963 and then from 1964 to 1966 taught literature and psychology first at Colegio de la Inmaculada, a high school in the Santa Fé province, and then at the Colegio del Salvatore in Buenos Aires. In 1970 completed also theology degree at the Colegio of San José.

In 1958 Bergoglio became a novice in the Society of Jesus. He was ordained a priest in 1969 and took his perpetual vows in the Society of Jesus in 1973. Begoglio became Archbishop of Buenos Aires in 1998, and then a cardinal in 2001. In March 2013, he was elected Pope by the papal conclave and chose the papal name Francis in honor of Saint Francis of Assisi making him the first Jesuit pope, the first pope from the Americas, and the first from the Southern Hemisphere.

Bergoglio is also a fan of the San Lorenzo de Almagro football club, enjoys the films of Tita Merello, neorealism, tango dancing, and milonga (the traditional music of Argentina and Uruguay).

Pope Francis was added to our PISA List in 2013.