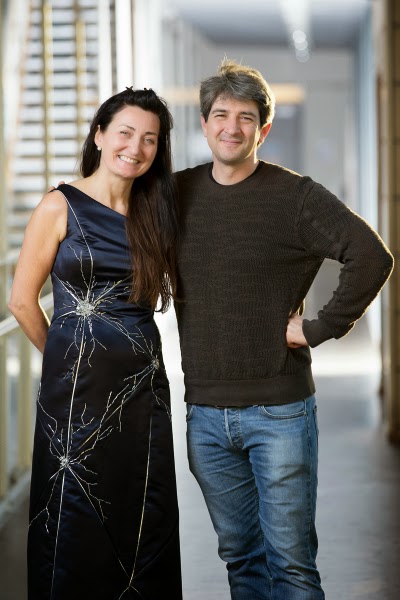 May-Britt Moser and Matthew Hubble. Image credit: Geir Mogenand/NTNU.
Back in 2006, Future-ish set out to, among many other things, make scientists celebrities on par with actors and athletes. There has certainly been a lot of evidence of exactly this happening since that time but a recent development may be the best realization of this dream yet...a scientist and fashion designer collaborated to create a stunning gown worthy of any red carpet. Indeed, worthy of a Nobel Prize winner.

In December 2014, University College London's John O’Keefe and Norwegian University of Science and Technology's May-Britt and Edvard Moser (why yes, they are married) were awarded the 2014 Nobel Prize in Physiology or Medicine for discovering neuron "grid cells" that serve as a system in the brain for spacial positioning, essentially the brain's GPS system.

With this news, British engineer turned fashion designer Matthew Hubble, saw an opportunity to create a special couture gown for May-Britt Moser. Hubble approached Moser with the idea, she agreed, and the resulting Grid Cell Dress is a peace of sartorial art that both rises to the Nobel Prize Ceremony occasion and serves as a unique communication tool that is sure to engage whole new audiences in groundbreaking science.

In the video interview in Manaster's article list below, Hubble comments on the collaboration:

"if we can get more fashion communicating more science to more people and widening the talent pool that might be interested in a career in science or engineering, then its a great thing to know that I can inspire people, as well as role models such as May-Britt."

Read more about Moser and Hubble's collaboration in the linked articles below.