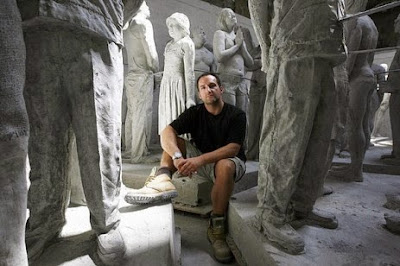 With an English father and Guyanese mother, Taylor grew up in Europe and in Asia where he spent formative years exploring the coral reefs of Malaysia. Taylor earned his Honours BA degree in Sculpture in 1998 from the London Institute of Arts. As a credentialed scuba diving instructor, underwater photographer, underwater naturalist, and conservation enthusiast, Taylor has the unique ability to create works of art that provide habitat for sensitive ocean corals and marine life.

In 2006, Taylor created the world’s first underwater sculpture park off the coast of Grenada in the West Indies which is now one of the Top 25 Wonders of the World according to National Geographic. In addition, the park was instrumental in the creation of a National Marine Protected Area. In 2009 he completed the worlds largest underwater sculpture museum, MUSA, situated off the coast of Cancun and the western coast of Isla Mujeres near Cancun, Mexico.

Taylor's most recent completed work, “Ocean Atlas” was installed in 2014 in the Bahamas. At five meters in height and weighing over 60 tons, "Ocean Atlas" is the largest underwater sculpture in the world. He is currently working in the Canary Islands on a new underwater museum for the Atlantic Ocean.