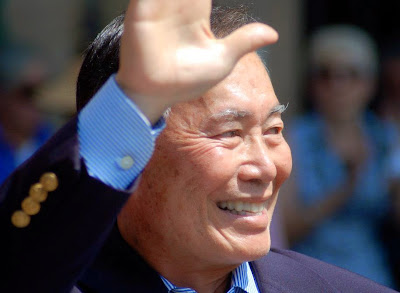 George Takei is an American actor, activist, director, author. Most of us know him either as Lieutenant Sulu from Star Trek or more recently as an outspoken advocate of LGBT rights. Takei was born in LA to Japanese-American parents, Fumiko Emily Nakamura and Takekuma Norman Takei. Takai’s father named him George after King George VI of the United Kingdom, whose coronation took place in 1937, the same year of George’s birth. George Takai himself is quite the Anglo/Britanophile.

In the 1940s, the Takei family was forced to live in War Relocation Centers (essentially internment camps) with many other Japanese-American families. At the end of WWII, his family returned to Los Angeles where Takai became later became student body president at his junior high school.

Takai studied architecture at UC Berkeley for a short time and later earned a BA in Theater in 1960 and MA in Theater in 1964 at UCLA. After his MA, he attended the Shakespeare Institute at Stratford-upon-Avon in England, Sophia University in Tokyo, and the Desilu Workshop in Hollywood.

After several roles in movies and television series in the 1960s, Takai landed the role of Lieutenant Sulu on Star Trek in 1965. He continued on in the Star Trek series but continued to add other movies, plays, and television series to his list of accomplishments through the 1990s and 2000s. His appearance in the hit series Heroes garnered much attention and his participation in several reality television shows such as the Apprentice increased his visibility in pop culture even further.

Takai has been active in the public sphere for many years. From being an alternate delegate from California to the Democratic National Convention in 1972 and an unsuccessful run for the LA City Council in 1973 to his role on the board of directors of the Southern California Rapid Transit District through the 1980s, he has remained active in both pop culture and politics. Takai has released several public service announcements, some humorous and some quite serious, response to anti-gay statements or legislation.

Although there was speculation for many years, Takei officially came out as gay in a 2005 issue of Frontiers magazine revealing his 18 year partnership with Brad Altman; it was a direct response to California governor Arnold Schwarzenegger's veto of same-sex marriage. Takei serves as a spokesperson for the Human Rights Campaign "Coming Out Project". Takai and Altman were the first same-gender couple to apply for a marriage license in West Hollywood.

Takai has received many awards and honors in his work on Japanese-American relations and LGBT rights. Takai received the Order of the Rising Sun from Japan in in 2004 and 2012 he received the LGBT Humanist Award from the American Humanist Association. In 2014, he received the GLAAD Vito Russo Award. Perhaps most impressive to Future-ish fans, NASA named Asteroid 7307 in Takei’s honor.

George Takai was named our Queen of The Smart Set for 2015.