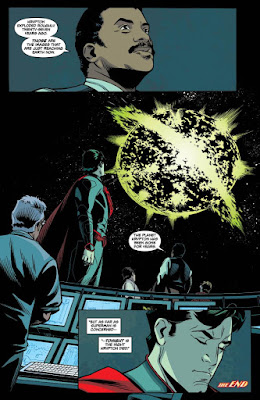 Image credit: DC Comics
Here at Future-ish, we love astronomy and we love cocktails. So to prep our fans (and ourselves) for those stellar weekend cocktail conversations, we are pleased to offer our Cocktail Astronomy post each Friday.

It's April Fools Day and this is an old story but it's great for re-sharing and impressing your friends. Because it's not a joke at all!

Back in 2012, DC Comics asked astrophysicist and Hayden Planetarium Director, Niel deGrasse Tyson, to search for a planet that met the description of Superman's home, Krypton. Tyson did just that by taking the information known about Krypton and matching that information to known solar systems.

Merging Tyson's scientific knowledge and process with the with the rich Superman canon was a milestone to the Superman story. So much so, that DC Comics issued a press release and Tyson appeared in one of the issues (Action Comics #14, Star Light, Star Bright) to explain to Superman how he went about finding the likely location of Krypton.

In the issue, after much research, Tyson focused telescopes around the Earth on the constellation Corvus constellation. One of it's stars, LHS 2520, is Krypton’s red sun, Rao. Superman then assembles the massive amount of data and creates images of Rao and Krypton. Sadly, it is just in time to witness Krypton's last moments, an event that occurred 27 years earlier but given its distance in light years, the images were only then arriving. As another DC Comics press release states, "Krypton was located on its final day of existence".